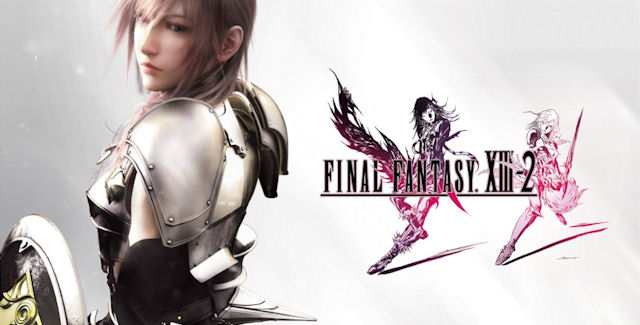 Our Final Fantasy XIII-2 walkthrough will guide you through the beginning to ending moments of gameplay with strategy tips for this RPG on the Xbox 360 & PS3.

Final Fantasy XIII-2 is the follow-up to the 2010 hit title Final Fantasy XIII, and the latest installment in the world-renowned Final Fantasy series, which has shipped over 100 million units worldwide. The all-star production staff returns to create a true sequel that offers a more immersive experience than its predecessor, with extraordinary level design that encourages exploration, a more strategic paradigm-based Active Time Battle system, the ability to tame monsters and have them fight in your party, and a multi-path, player-driven experience that aims to give you lots of replay value.

Please note that viewers must be at least 16 to watch, so no harm comes to those with innocent eyes. This game includes Drug Reference, Mild Language, Mild Suggestive Themes, Simulated Gambling, Violence.

Cocoon – a utopia in the sky. Its inhabitants believed their world a paradise. Under the Sanctum’s rule, Cocoon had long known peace and prosperity. Mankind was blessed by its protectors, the benevolent fal’Cie, and believed that tranquil days would continue forever. Their tranquillity was shattered with the discovery of one hostile fal’Cie. The moment that fal’Cie from Pulse – the feared and detested lowerworld – awoke from its slumber, peace on Cocoon came to an end. Fal’Cie curse humans, turning them into magic-wielding servants. They become l’Cie – chosen of the fal’Cie. Those branded with the mark of a l’Cie carry the burden of either fulfilling their Focus or facing a fate harsher than death itself. A prayer for redemption. A wish to protect the world. A promise to challenge destiny. After thirteen days of fates intertwined, the battle begins.

Three years after Lightning and the others saved Cocoon, some survivors decided to start over by rebuilding on Gran Pulse. Lightning, however, is nowhere to be found and thought dead by many, but Serah believes otherwise. When her town is suddenly overrun by monsters, a mysterious man named Noel appears to save her. Together, the two set off on a journey that transcends time and space, hoping to find Lightning.

Episode 1: A World Without Cocoon

New Bodhum in 003 AF (After the Fallen). Let’s begin our adventure!

Part 2 of Episode 1. At the beachfront you can do a Mog Clock tutorial.