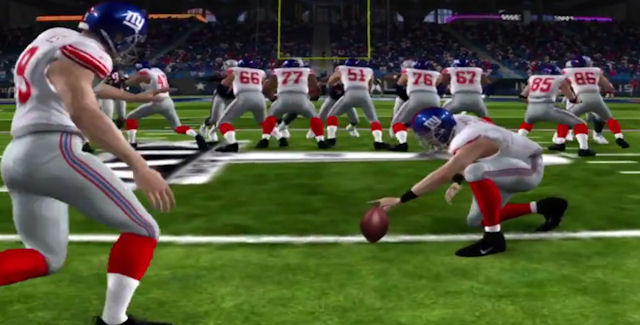 According to EA Sports’ yearly simulation of the Super Bowl with Madden NFL 12, the result for 2012 is predicted to see the New York Giants become the Super Bowl XLVI / 46 champions.

Find out who will win Super Bowl 46 in this Patriots vs Giants simulation powered by Xbox 360.

The exciting ending was reminiscent of what took place in the title game four seasons ago when the Giants stunned the Patriots 17-14 after a heroic game-winning touchdown late in the fourth quarter of Super Bowl XLII.

Giants Quarterback Eli Manning was named the game’s MVP, completing 25 of 39 passes with two touchdowns and an interception. New England’s Tom Brady also had a big day, throwing for 327 yards and three touchdowns with one interception.

Most of Brady’s best moments came late in the game.

Trailing 24-10 with less than 10 minutes remaining in the fourth quarter, Brady led New England on a furious rally, scoring two touchdowns to tie the game 24-24, the second coming on a 14-yard pass to wide receiver Wes Welker with 1:50 left on the clock.

Unfortunately for New England, there was still plenty of time left for Manning and the Giants’ offense.

Mixing in short passes to wide receivers Victor Cruz and Hakeem Nicks, and with key runs by running back Ahmad Bradshaw, Manning drove New York down the field and into New England Territory, setting up Tynes’ second game-winning conversion in two games.”

Who do you think will win the Super Bowl 46?