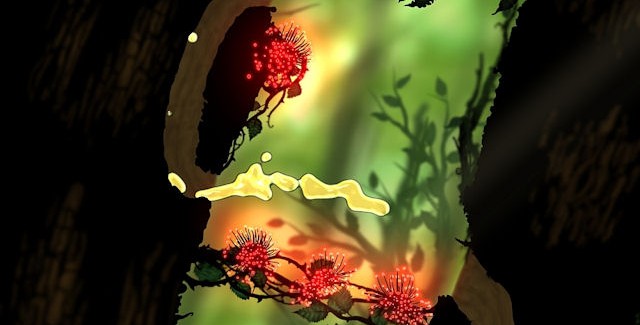 Content: Puddle
Price: 800 Microsoft Points (that’s US$10 / €9.60 / £6.80 / CAN$12.40 / AU$13.20)
Availability: Check availability in your Xbox LIVE region
Dash Text: What began as a student project that won a Student Showcase prize at Independent Gaming Festival at GDC 2010 is now a full-fledged downloadable game experience like nothing you’ve ever played before. Guide puddles of fluid through a variety of novel, themed environments (the human body, a garden, a foundry, and more). But to do so, you must tilt the environment, balancing each fluid’s unique properties with the environmental factors of gravity, friction, and each course’s obstacles.

Content: Quarrel
Price: 400 Microsoft Points (that’s US$5 / €4.80 / £3.60 / CAN$6.20 / AU$6.60)
Availability: Check availability in your Xbox LIVE region
Dash Text: QUARREL is the most novel word game ever made. But don’t just take our word for it – grab it now and enter a universe where WORDS (11 points) literally speak louder than ACTIONS (8 points). Use a cool combination of word power and strategic cunning to crush your opponents and reign supreme. Come settle your differences with wordplay rather than swordplay; make verbal not chemical weapons; load up with letters not bullets and use chatter to batter your enemies into submission and rule the world. Compete to use your troops to make the highest-scoring word from the letters given then capture territories and conquer islands in this wholly original virtual board game.

This seaside Italian getaway is anything but idyllic, as tight corners and branching pathways pose great risk at every turn. Close-range combat dominates, and the team that best utilizes flanking routes will most often come out on top. Attacks from behind, above and below are an ever-constant threat. Keep up your awareness and don’t get taken by surprise.

A militarized Central Park stretches across a vast landscape, ripe for long-range sniper and LMG fire. Mounted turrets on either end lend power to anyone brave enough to expose themselves in exchange for deadly firepower. Plan out your movement and always be aware of nearby sightlines to avoid becoming fodder for the enemy.

* Jimmie Johnson’s Anything With An Engine Demo
Dash Text: Kart Racing Where Everything and Anything Goes…Fast! Lead-footed bathers, dumpster divers, lawn-mowers, bargain shoppers, sadistic caddies and many more race and battle their way toward glory in unique vehicles outfitted with custom weapon mods on uniquely stylized tracks strewn with themed hazards, traps and awesome jumps in a humor-packed race to the finish line. Up to 4 player split-screen and 8 player online multi-player. 3D TV Support.