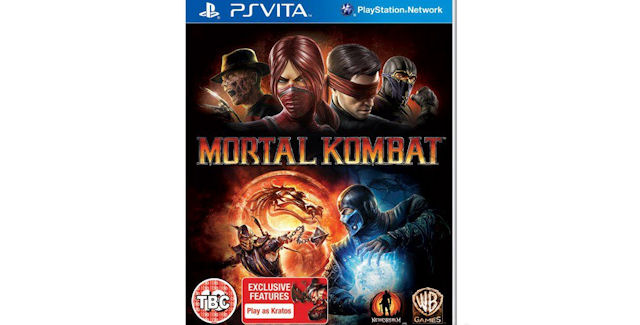 “The original game content and new features we developed for the PlayStation Vita will provide gamers with the best fighting game experience available on the new mobile platform.” -Ed Boon

Ed Boon, Creative Director at NetherRealm Studios, had this to say about his game: “The NetherRealm team is committed to making sure that we follow up the success of 2011’s Mortal Kombat with an equally compelling experience on the PlayStation Vita. The original game content and new features we developed for the PlayStation Vita will provide gamers with the best fighting game experience available on the new mobile platform.”

1. “In terms of gameplay, we’ve always wanted MK to be as accessible as possible. For example, you can touch your X-ray meter to execute an X-ray attack. For fatalities, you can slash the screen with the appropriate inputs — say, away, away, up — to execute the fatality. It makes some of the more difficult fatalities easier and it’s fun to slash at your screen to fire off a fatality. I was surprised by how engaging it is. There’s a lot of precision with the slicing mechanic, so it works well for fatalities.”

2. “There are actually two Challenge Towers in the PS Vita version, and the new one has 150 challenges that are exclusive to PS Vita. A number of those challenges use PS Vita’s hardware features: the touch screen, [and] the accelerometer. But in the new Challenge Tower, there are challenges that are unique to PS Vita’s capabilities. Over the years we’ve had Test Your Might, Test Your Luck, Test Your Sight… well, we’ve added two completely new ones for PS Vita. Those extra 150 Challenge Tower missions are tons of fun. Imagine tilting your PS Vita and affecting gravity in the game, things like that.”

In a triumphant return to the game’s original mature presentation, Mortal Kombat offers over-the-top fatalities and cringe-worthy X-ray moves. This latest iteration in the franchise brings the game back to a 2D fighting plane and introduces a number of new gameplay features including Tag Team, Challenge Tower and a deep story mode. Several new features have been developed exclusively for Mortal Kombat for PS Vita system, which will be revealed in the coming months.

You can already play a demo of Mortal Kombat for PS Vita system by visiting the Vita Hill Social Clubs.

Kratos, The God of War, hacks and slashes his way through the Mortal Kombat tournament. Formerly a PS3-exclusive, he’ll be playable in the PS Vita version as well! Take a look at the original PS3 trailer:

Does a portable version of Mortal Kombat 2011 sound good to you?