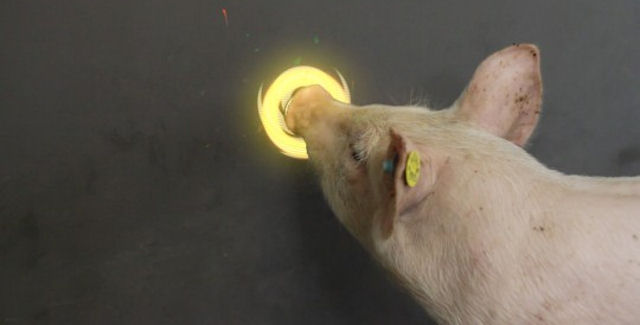 A Dutch gaming company, through the Utrecht School of the Arts, is testing a game called Playing With Pigs / Pig Chase. The game that’s currently under development, connects users to real-live pigs that they can interact and play with via their iPads.

The way the iPad App let’s you play is by steering a light to objectives, which in turn the pigs will play with. Yes, just like how cats are obsessed with the light from a laser-pointer, the animal scientists discovered that “pigs like to play with light”! 😀

This way you won’t get dirty, but still get all the fun of watching little piggies run around. Take a look at it in this newsreport.

Did you know? Since 2001 law in the European Union has required pig farmers to provide forms of entertainment for their livestock, “as a way of keeping them in good emotional health.”

I bet you’ll think twice now before saying “When pigs fly”, if they like playing games, perhaps they’ll develop wings at some point too! 😉