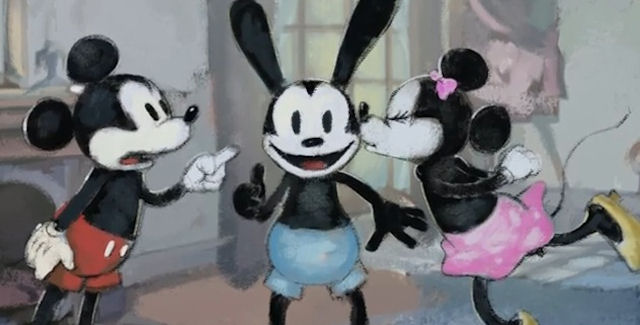 The official Disney Newsletter has announced the development of Disney Epic Mickey 2 for Nintendo Wii, PlayStation 3, and Xbox 360. It features both single-player and a new co-op multiplayer mode for the campaign! The platformer action-adventure game is due in Fall 2012.

The original Disney Epic Mickey, which was a Wii-exclusive, ended up selling a massive 2 million copies in North America and Europe combined in the half year following its November 2010 release.

To quote the Disney Newsletter:

“Disney Epic Mickey 2 is the latest game in the critically acclaimed Disney Epic Mickey videogame series. In this all-new action-platforming game available for Xbox 360, PlayStation 3, and Wii, Mickey embarks on an epic journey and is pulled back into a world filled with Disney’s forgotten characters.

Players can choose to play single-player as Mickey or for the first time players can also choose 2-player split screen mode. In the 2 player mode one person can play as Mickey wielding magic paint and paint thinner to dynamically change the world and the second player can play as Oswald the Lucky Rabbit – Walt Disney’s first cartoon star – with the power to fly like a helicopter and use electricity to fight or friend enemies and solve challenges. Team-up and choose your path to save this forgotten world because the choices you make will alter the story and change the end of the game!”

Although the multiplatform move is great news for gamers everywhere, the question remains if the experienced designer Warren Spector has stuck around to make the sequel?

The Epic Mickey series has a fantastic cast and painting style going for it. Take a look in this Epic Mickey launch trailer:

Is Mickey & Oswald’s return epic news to you?