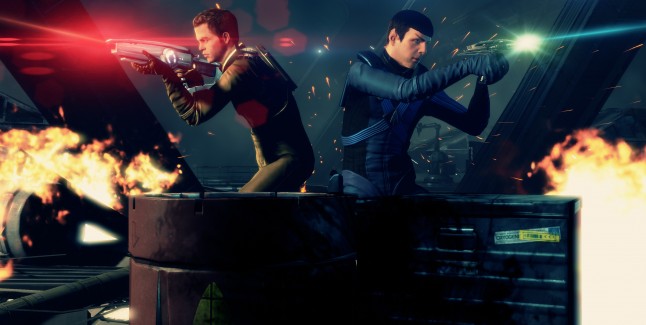 This Star Trek: The Game preview will give a quick look at what can be expected from Digital Extremes’ upcoming third-person, action/adventure title.

The game will be set in the alternate timeline featured in the recent J.J. Abrams movie and will continue along that path with the Enterprise crew. Players will be able to control either James T. Kirk or Spock in both single player and co-operative modes.

The game is currently in development with no listed release date, we do know however that game is due to hit retailers sometime in 2012!

Have a gander at the new co-op Star Trek shooter starring Kirk and Spock from the E3 2011 with first in-game footage.

Here is a list of key features that will be available in Digital Extremes’ Star Trek: The Game based on news and announcements made so far.

“Star Trek challenges the boundaries of co-op gameplay with a galactic adventure gamers and fans have never experienced,” said Tom Lesinski, President, Paramount Digital Entertainment. “Working closely with the Star Trek filmmaking team throughout development, the game is sure to deliver AAA production values, a wide variety of gameplay and all the action you would expect from the hit franchise. This will be the definitive Star Trek gaming experience.”

Excited for this game? Leave your comments and opinions in the section below!

Be sure to check out our Star Trek: The Game Screenshot Gallery!