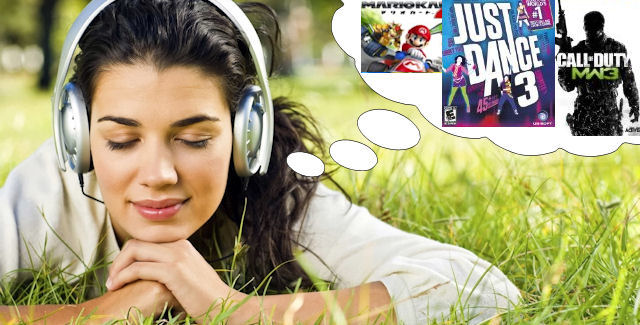 What were the best-selling games in America, Japan, and Europe this week? Thanks to Amazon online sales data here are the games that are the hottest. Think of it as a games weather report.

Thanks to Christmas shoppers the bestsellers seemed to have mostly been family-friendly and social multiplayer games in the West.

Just Dance 3 has made its debut and finally there’s a game out-shaking Just Dance 2 on the weekly charts! Ubisoft has made quite a splash with the series that’s now gone multiplatform, although the favorite version is still on Wii.

Here’s the launch trailer for the game.

In Japan, neither Final Fantasy XIII-2’s #3 debut nor PlayStation Vita’s Saturday launch, made a dent in the Nintendo-ruled charts. The only portable Sony games that came close to showing up were “Everybody’s Golf 6” and “Uncharted: The Beginning of an Adventure Without a Map”. But with 700,000 units shipped, this may simply mean PS Vita owners are downloading their games instead.

Nintendo brings the Mario racing series to the 3DS handheld with Mario Kart 7. Nintendo EAD who developed the game, previously made Mario Kart DS & Mario Kart Wii. And it shows in this cross between all previous six Mario Kart games.

Activision may have pulled off the biggest media launch ever with 9 million copies of Call of Duty: Modern Warfare 3 sold worldwide in its first 3 weeks in America alone. But Just Dance 3 still managed to out-sell it online. Crazy as it sounds, that may mean that in the coming year both games are set to have more than 25+ million worldwide sales!