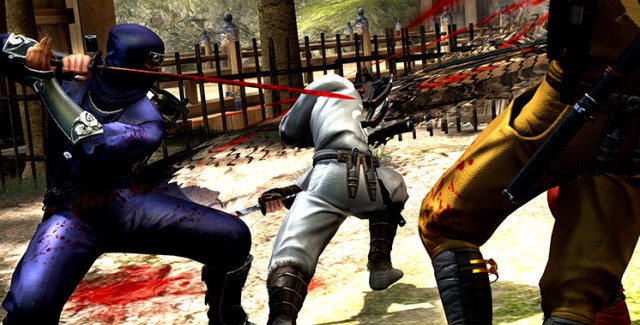 Ninja Gaiden 3 will feature online multiplayer, as well as Co-Op modes revealed Tecmo. The Ninja Gaiden 3 release date is March of 2012 for Xbox 360, PS3 and Wii U.

There will be three different multiplayer modes in the game, with the chief mode currently being shown off pitting two teams of four ninjas against each other. Other modes will feature a free-for-all, and then an additional mode which isn’t being detailed just yet.

Additionally, you’re online character is completely customizable! As you can see in this video.

The online mode basically plays like you’d expect, as if you stuck the single-player into a multiplayer setting (speaking of the single-player, Tecmo confirmed that characters from the original Ninja Gaiden NES series will make their grand return in this game!). Instead of fighting against the CPU, your opponents are actual human beings! And when you’re trying to kill an opponent and you land an attack, your opponent will have means of reflecting the attack. You can even “die with honor” via the Seppuku, executing yourself before your opponent gets their chance to finish you off!

A ton of unlockable Weapons will also be present as players battle in the multiplayer and level-up their character. You can even unlock different armor sets and Ninpo Magic. You’ll start off with a Katana, Bow, Shuriken and basic projectile-based Ninpo.

It was also revealed that the PS3 version will make use of PlayStation Move, with Team Ninja hoping you’ll feel more like you are actually slicing through a person using the Move controller. Stereoscopic 3D will NOT be used, Tecmo-confirmed. The Wii U version meanwhile will have unique touch-screen-based controls that make use of the Wii U Controller.

In addition to the online multiplayer, players will be able to partake in Co-Op “Ninja Trials”. Which promises some of the “hardest team missions in the Ninja Gaiden series”. You can even join up with other players to form clans and go on “Clan Battles”, that will pit your clan against the best of the world. Online success rewards with Experience and unlockable items to customize your online ninja. And those who rise to the top will be able to face off against Ryu Hayabusa himself!

The multiplayer is apparently really fantastic and fun, playing like nothing else out there on the market. Definitely looking forward to this!

Here’s a look at the online multiplayer of Ninja Gaiden 3 in action!

Thanks to GameSpot for the videos.