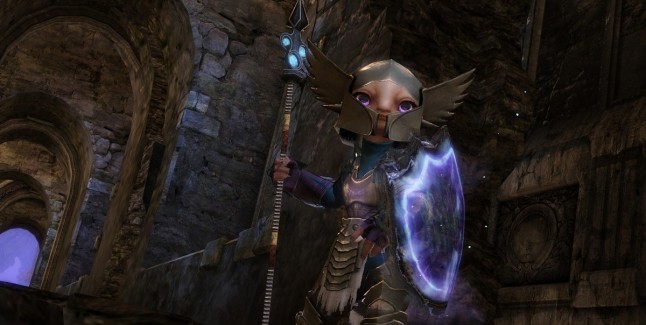 This Guild Wars 2 preview will give a quick look at what can be expected from AreaNet’s upcoming massively online multiplayer game.

Guild Wars 2 takes place in the high fantasy world of Tyria, 250 years after the players’ defeat of the Great Destroyer in the Eye of the North expansion.

The player is tasked with reuniting the members of the disbanded Destiny’s Edge, a multi-racial adventuring guild whose combined strength is needed to combat Zhaitan, the undead Elder Dragon.

Guild Wars 2 is a massively multiplayer online role-playing game in development by ArenaNet. Set in the fantasy world of Tyria, the game follows the re-emergence of Destiny’s Edge, a disbanded guild dedicated to fighting the Elder Dragons.

The release date has yet to be announced, but we can expect to see the game sometime in 2012!

The interview with Arenanet’s Colin Johanson continues as he talks about diverse matters such as the new Sulvari race and the keg brawl mini.

Game designer Isaiah Cartwright talks about the combat in this video.

And take a look at the complete 40+ minute demonstration of Guild Wars 2 as shown to the press at GamesCom 2010 in Cologne. Played by ArenaNet and commented by Eric Flannum himself!

Here is a list of key features that will be available in AreaNet’s Guild Wars 2 based on news and announcements made so far.

The Modified Game Engine
Guild Wars 2 uses a heavily modified version of the game engine developed for Guild Wars. The modifications to the engine include real-time 3D environments, enhanced graphics and animations and the use of the Havok physics system.

Level Cap
The low level cap of Guild Wars (20) has been replaced with one capping out at 80, which strikes a balance between character development and avoiding grind-based gameplay that too often accompanies a high level cap.

Professions
Guild Wars 2 will allow players to create a character from a combination of five races and eight professions, which are divided into armor classes. The professions announced thus far are as follows:

PvE and PvP
In PvE, grind is combated with a sidekick system, similar to that used in City of Heroes, allowing two players with a large level disparity to normalize their levels and enjoy content as though they were the same level. In PvP, entry to e-sport will grant access to all skills, items and provide a fixed level, so that all players will be on a level playing field.

Are you excited for the game? Leave your opinions and comments in the section below.

Be sure to check out our Guild Wars 2 Screenshots Gallery!