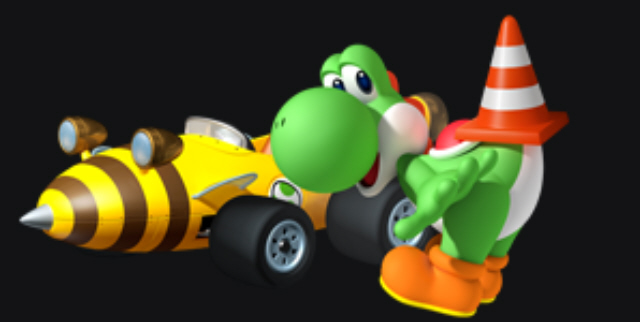 This also marks the first time the Mario Kart series has been presented in 3D… glasses-free, stereoscopic 3D of course!

So what do I think about the new Mario Kart game, and how does it stack up to previous games in the series? Are the new features worth the price of admission?

Here’s a fantastic trailer for the new 3DS racing game:

Now let’s go over all parts of the game to score them:

Mario Kart 7 looks great. It looks just like the console games, and offers interesting environments for you to race through. However the game DOES NOT make great use of the stereoscopic 3D… in fact “What? Mario Kart 7 was in 3D?” is the more likely reaction after playing it. The only real place I noticed it was the menus and text, or the starting count down… Either way, the game still looks and run fantastic.

There is nothing great about the music or sound. Some of the new voice acting is annoying (Rosalina, I’m looking at you!) although Mario has some good lines. The music seems to take a huge backseat, and also appears low. Sometimes I feel like the track doesn’t even have music. But it’s Mario Kart, and all the sound effects you’d expect are here again.

Mario Kart 7 has a fully functional online mode, a Mario Kart 7 Channel, supports SpotPass and StreetPass, and features other perks like the ability to form Communities, 8-player online play, and Worldwide online support. And for those who love Mario Kart, you’ll likely want to play through all of the modes and tracks, which include 8 Cups (4 Cups composed of all-new courses, 4 Cups composed of retro courses) and three difficulty modes; with an unlockable fourth difficulty in the Mirror Mode. There are also 9 characters to unlock, and plenty of additional Karts and Parts to unlock by collecting Coins.

Taken as a whole, there is a wealth of content here which is sure to keep fans busy for a long time.

Mario Kart 7 is a fun game, but the game is not any more fun than previous games in the series. If you loved Mario Kart, you’ll either love this one or find yourself disappointed. Deep cuts have been made in the roster compared to previous console entries in the series, although some new characters have been added (which will be completely hit and miss, though very few people will be ecstatic about “Honey Queen”…) as well.

Extra features have been added in the form of the ability to glide through the sky or drive through the water; but cool perks like motorcycle driving or two characters per kart (as introduced in Double Dash) have been changed. In addition to driving through water and gliding through the air (which is cool), players can change their stats through unlocked Karts and Parts (wheels and gliders), which is great.

The game also has a fully featured multiplayer mode including 8-player local and online play, worldwide online multiplayer, battle mode and you can even form your own online group (called a “Community”), however I’ve had multiple problems trying to connect and play online, and the problems with online seem to be widespread.

Thankfully, Mario Kart 7 offers a host of great new tracks as well as a gaggle of retro tracks. In the end, Mario Kart 7 is a great game. But whether or not it is a killer-app will depend entirely on how much you love Mario Kart, and whether unlocking “Honey Queen” makes you smile or not.

Mario Kart is Mario Kart, so Mario Kart 7 will surely be a system seller, but it is no more great than previous games that came before it.

BUT if you’ve never played Mario Kart, what you’ll find here is a fantastic and fun racer! 😀

Four months after release I’m still playing Mario Kart 7 online, for me that amount of longevity puts the 3DS game on par with the previous portable outing in Mario Kart DS. There’s a reason why Mario Kart 7 is selling 2.25 million copies per month worldwide, it’s worth picking up a 3DS handheld for if you’re a racing fan! My final Fun Factor is 9.5 out of 10.