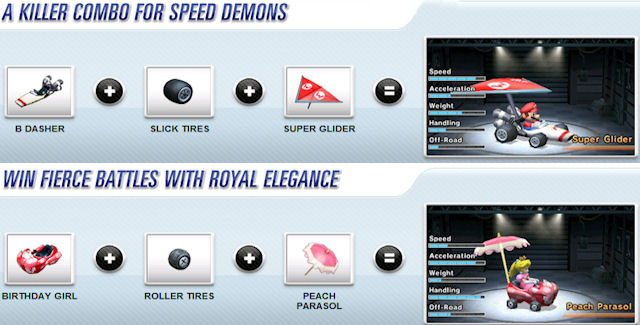 Welcome to our Mario Kart 7 unlockables guide for karts & kart parts. Mario Kart 7 allows players to customize their Kart to their own liking by selecting from 18 different Karts, 16 different Wheels and Gliders, and 17 different characters, to create the exact racer you want!

How To Unlock Karts & Parts?

Karts and Parts (Wheels and Gliders) are unlocked by collecting Coins. Up to ten Coins can be collected on a single track, and you will find them scattered about each and every track from all the Cups. Collecting ten Coins increases your top speed, while getting hit by a projectile, ramming into a course hazard, or falling into a pit causes you to lose major Coinage (not good). Finish the race with Coins intact (preferably 10, the max you can collect) and they will be added to your total. You will then unlock a new Kart or Part once you finish the Cup for every 50 Coins that you collect.

This means you’ll unlock a new Kart or Part at 50 Coins, 100 Coins, 150 Coins, 200 Coins, 250 Coins, 300 Coins, etc. Karts and Parts can be unlocked no matter what difficulty you are playing on, who you are playing as, or what Cup you are racing on. However you must complete a track and cross the finish line for the Coins to be added to your total. Thus, simply playing through the Grand Prix single-player mode starting at 50cc and working your way up through each Cup and then each difficulty (50cc, 100cc, 150cc) is the best way to unlock each and every Vehicle and Part, as you will collect 50 Coins about every four tracks, which is the exact amount of tracks found in each of the Cups! As an added tip, completing a cup on 150cc mode will unlock a new character!

How Many Coins Are Needed To Unlock Every Kart, Wheel & Glider?

This list provides you with exactly how many Coins you need to unlock each and every Kart, Wheel or Glider in the game! The list is just an example, because everyone unlocks the kart parts in a different order because it’s random. Mario Kart 7 contains 22 Karts and Parts in all! Simply start playing the game on 50cc then work your way up to 150cc and you’ll have all of them unlocked in no time! But remember to keep your focus on collecting those Coins! Coin collection is the key to unlocking Karts and Parts!

The list shows how I unlocked the first 20 parts, you’ll unlock them in a different order:

UPDATE:
It looks like the kart parts may be unlocked at random too opposed to the list above. Here’s an example of what happens in the game when I collected 250 Coins and received the Egg 1 Frame Kart Part:

Each of the games many characters come with their own innate stats in the areas of Speed, Acceleration, Weight, Handling and Off-Road. By swapping out different combinations of Kart, Wheel and Glider, you can modify these stats to fit your own desires. Do you want a light character who drives like an off-road heavyweight? It’s possible! Do you want a Heavyweight driver who can turn-on-a-dime and accelerate as if he was as light as a Mushroom? IT’S POSSIBLE!

To recap, below is the master list of karts and kart parts.

These are the Karts you start the game with. You can unlock more by collecting Coins during races.

These Karts require you to collect Coins in order to unlock them! See the list below to find out exactly how many Coins you need to unlock each Kart or Part.

Please comment if you need more help or just to let us know if we helped you out.
Thanks for visiting! 😀