How To Unlock All Mario Kart 7 Characters, Vehicles & Tracks 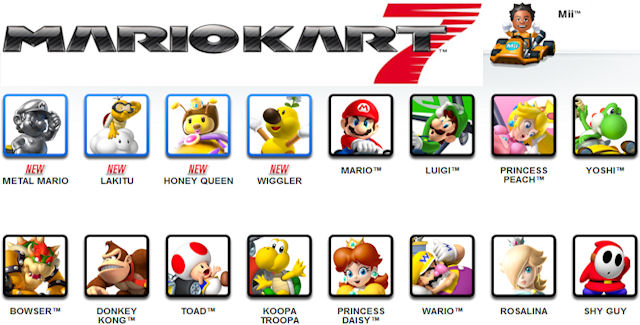 5. How to Unlock Shy Guy

The timid, sly, masked troublemaker, Shy Guy, can be unlocked in Mario Kart 7 as a playable character by winning the Shell Cup on 150cc Difficulty.

Shy Guys are an enemy type that hail from Super Mario Bros. 2 on the NES, a game that introduced many unique enemies into the Mario universe (thanks to the fact that the game wasn’t originally a Mario game). Shy Guy made his debut as an actual playable character starting with Mario Tennis on the Nintendo 64, and made his Mario Kart debut with Mario Kart DS; where Shy Guy was the default Download Play multiplayer character. Mario Kart 7 however marks the first time that Shy Guy has debuted as a main racer (albeit a secret one) in the Mario Kart series.

6. How to Unlock Honey Queen

Honey Queen, the Bee Queen of sweets, is unlockable as a playable character in Mario Kart 7 by beating the Banana Cup on 150cc Difficulty.

7. How to Unlock Wiggler

The multi-legged Mario enemy, Wiggler, is an unlockable character in Mario Kart 7 who is earned by winning the Leaf Cup on 150cc Difficulty.

Wiggler is a classic Mario enemy who made his first appearance in Super Mario World. This marks the first time that Wiggler has appeared in any Mario game as a playable character! Wiggler is a unique enemy in that he appears docile at first, but when Mario would stomp on him, Wiggler would turn dark red and charge toward Mario at a quick and angry pace. Wiggler’s appearance in Mario Kart 7 may also mark the turning point of this character from enemy to friend; similar to Lakitu’s transition from foe to friendly.

8. How to Unlock Lakitu

The cloud-floating, glasses-wearing Koopa Troopa known as Lakitu finally appears as a playble character in Mario Kart 7! He is unlocked by winning the Lightning Cup on 150cc Difficulty.

Lakitu is a classic Mario enemy who made his first appearance in the original Super Mario Bros., as a character who dropped spiked Spiny enemies on our heroes. With his appearance in the original Super Mario Kart, Lakitu took on a more friendly roll as the race referee and traffic light holder at the start of each race. He was promoted to a more prominent role with Super Mario 64 as that game’s camerman. In recent times Lakitu has had large roles in many off-cannon Mario adventures (RPGs in particular) and Mario Sports titles, Mario Party titles, etc. However Lakitu’s appearance as a racer in Mario Kart 7 marks the first time he has ever been playable! Welcome to the family Lakitu! It’s about time!

9. How to Unlock Mii

Your 3DS Mii Avatar can be unlocked as a playable character in Mario Kart 7 by winning each and every cup on any difficulty setting (so you can beat them on 50cc, 100cc, 150cc or any mix to unlock Mii).

Miis represent yourself in Wii and 3DS titles, and have appeared as playable characters ever since the Wii’s debut and the Nintendo Wii launch title Wii Sports. In more recent times they have made appearances that make them more of an actual character, such as this appearance in Mario Kart 7 where your Mii appears as an actual playable racer. Previously Miis became playable as an unlockable character in Mario Kart Wii.

Earning Coins in the game will unlock all-new Vehicles for you to race as. These same Coins may also unlock a new part, either a new Wheel or new Glider. A new part in any of the three categories (Kart, Wheel or Glider) will unlock for every 50 Coins that you collect. So you’ll unlock a new Kart or Part at 50 Coins, 100 Coins, 150 Coins, 200 Coins, 250 Coins, 300 Coins, etc.

Coins are scattered throughout each and every course and can be collected by riding into them. You can collect a total of ten Coins per course, and obtaining 10 increases your top speed. However you will lose Coins if you are hit by an enemy projectile, a track hazard, or fall into a pit. You will then have to collect them again. Thus, beating each course with 10 Coins intact is no easy feat! Remember to hold items behind your Kart (by pressing and holding down the L Button) to protect your rear, this will greatly help you fend off incoming projectiles from your opponents, which will knock Coins out of you if you get hit!

Having said that, you’ll very quickly earn the required number of Coins to unlock a new part or a new Kart, and completing a Cup on any difficulty setting (50cc, 100cc or 150cc) will generally earn you 50 Coins, allowing you to unlock a new Kart or Part.

Each character in the game has specific stats (represented by bars) in the areas of: Speed, Acceleration, Weight, Handling and Off-Road. You can see these stats when you choose your character. These stats are then modified by choosing a different combo of Kart, Wheel and Glider. As such, you can choose certain combos to give a slow character great acceleration, or give a lite character more weight. Choose wisely!

Default Karts
These are the Karts you start the game with. You can unlock more by collection Coins during races.

As you might imagine, there are several cool and funky Karts that you can unlock to race in by earning Coins. These unlockable Karts offer you much better and much more varied stats than the Default set of Karts that you have when you first boot up the game. It will take a while to unlock all of the Karts, but it is definitely worth it. Unlocking Karts also gives you something to look forward to as you keep playing through the different Cups and difficulty levels, collecting Coins which will eventually unlock the following Karts. Once you have them all, you’ll have a nearly endless number of different combinations that can be created for each of the games 17 characters.

How to Unlock Karts, Wheels and Gliders

The following list shows you how many Coins (or Star Rank) you need to unlock the specified Kart, Wheel or Glider. There are 22 Karts and Parts in all for you to unlock! The easiest way to unlock all of these different Karts and Parts (race cars, wheel sets and gliders) is to simply play through the Cups in the main campaign.

UPDATE
Apparently the Karts and Parts are randomized, so you will not unlock exactly what it shown here for the same amount of Coins. But eventually what you earn will match this list, it’s just the order that is randomized. Thanks to sammy g. for pointing this out!

One of the best ways to unlock all of the above Karts and Parts is to start playing the single-player Grand Prix mode on 50cc, and then go through each of the difficulty settings, from 50cc to 100cc and finally to 150cc. Each time you finish a new Cup and its four courses, you will most likely unlock a new Kart, new Wheel or new Glider. This has the added bonus of unlocking a new character as well once you reach the 150cc Difficulty level, where you’ll unlock a new character each time you finish a Cup.

All-new Cups that contain new tracks can be unlocked by clearing the previous Cup on the same difficulty setting. This means that beating the Mushroom Cup on 50cc will unlock the Flower Cup on 50cc. But won’t unlock the Flower Cup for the 100cc class or greater. So if you consider yourself a master Mario Kart player, you may want to start the game playing o 150cc, which will immediately give you a new character each time you beat a Cup.

Here is a list of all the Cups and Tracks in the game. The Mushroom Cup and onward, feature all-new tracks, while the Shell Cup and onward feature classic Mario Kart tracks from past games from all systems.

In addition to the above new and classic courses, the game also features 6 Battle Courses for play in the online or offline multiplayer modes. There are three all-new Battle Courses and three retro Battle Courses taken from past Mario Kart games from all systems. You will only see these tracks if you are playing the game in multiplayer.

Thanks for visiting! Please comment if you need more help or just to let us know if we helped you out. 😀