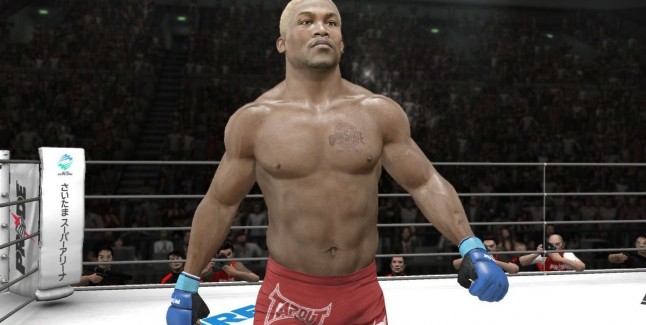 This UFC Undisputed 3 preview gives a quick look at what can be expected from Yuke’s upcoming sports title.

UFC Undisputed 3 ups the intensity with the addition of PRIDE Mode, a brand new submission system, new ways to finish the fight and increased accessibility through both traditional and simplified gameplay controls that, along with significant enhanced visuals, new camera positions and personalized fighter entrances, let you step right inside the Octagon!

Learn all about the improved ground game and new submission system in this UFC Undisputed 3 gameplay trailer!

Hear the latest updates on UFC Undisputed 3 in this interview with producer Neven Dravinski.

And in this video, THQ’s Senior Designer Wes Bunn walks and talks us through Undisputed 3’s Pride mode, which looks to add to the franchise’s already massive arsenal of features!

Here is a list of key elements that will be available in Yuke’s UFC Undisputed 3 based on news and announcements made so far.

Elements such as Elbow spamming, ref and sub-cancelling have been fixed.

The Roster
The UFC Roster, as revealed by ESPN, is as follows:

The PRIDE Roster
PRIDE plays by a different set of rules and moves than the UFC. Soccer kicks, knees to the head and face stomps are all legal moves in this Mode and PRIDE matches also consist of three rounds with irregular times. Round 1 lasts 10 minutes, while Rounds 2 and 3 each last five minutes.

The PRIDE Roster is as follows:

Be sure to check out our UFC Undisputed 3 Screenshots Gallery!