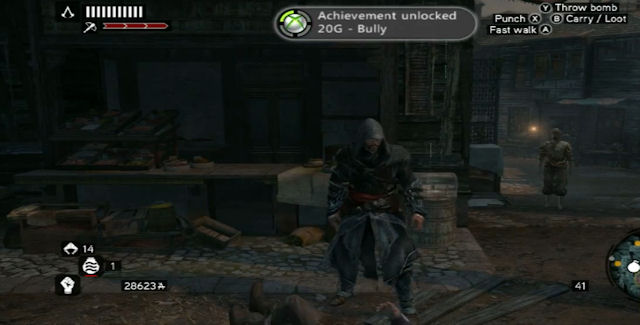 Our Assassin’s Creed Revelations Achievements guide & Trophies guide lists every Achievement & Trophy for this Xbox 360, PS3 & PC epic RPG sequel and tells you how to get and unlock them.

The Hagia Sofia challenge gets available after collecting all 10 of Ishak Pasha’s memoir pages (shown below on #28). See Worth A Thousand Words for their locations. You will need to play until DNA Sequence 5 – Memory 3 to reach all of them. This means you can’t enter the hidden Hagia Sofia Tomb any earlier. Once you got all memoir pages you need to head over to the Hagia Sofia building. You can travel there directly using the Tunnel Entrances. The hidden tomb will be marked on your map. You need to complete some climbing sections and follow the given paths. In addition to the achievement/trophy you will also receive a new armor after finishing the Hagia Sofia Level successfully. It’s said to be the best armor in the Assassin’s Creed series yet!

28. Worth A Thousand Words (20G) – Collect all of Ishak Pasha’s memoir pages.

There are 10 Memoir Page locations in total. You need to play until DNA Sequence 5 – Memory 3 to reach Memoir Page #7. These memoir pages are needed to unlock the so called “Hagia Sofia level”, also known as the hidden tomb. Hereby it’s related to the Holy Wisdom Trophy / Achievement (shown above on #26).

You can replay DNA Sequence 2 – Memory 6 to get this done easily. It’s basically the tutorial about the den defense system.Your den may not be hit at all. Do never make use of the L2 (PS3) / LT (Xbox 360) Button. This would trigger a cannon shot which will end in failure.
The most important thing is to install barricades wherever it is possible. In the very end a battering ram will roll in and the barricades are needed to slow it down. You can also use your pistol by pressing Square (PS3) / X (Xbox 360) to support your allies.

32. Spider Assassin (20G) – Climb Hagia Sofia, from the ground to the pinnacle, in under 25 seconds.

Hagia Sofia is located in the imperial district. You can use a tunnel entrance to travel there. You should play until you get the hookblade in Sequence 2, Memory 3 before doing this. The hookblade will allow you to climb much faster. Simply climb the pillar on top of the building. You will need to start from the ground.

33. A Friend Indeed (20G) – Complete all Faction Creed Challenges from a single faction.
34. Tax Evasion (10G) – Get your money back from a Templar tax collector.
35. The Mentor (20G) – Have seven trainees reach the rank of Master Assassin.

Go to Fatih Camii (you can travel there by using a Tunnel Entrance). Go up the rooftop and you will see 8 guards in the courtyard. Use a Cherry Bomb to group them up. Once they are close together you throw a Smoke Bomb and jump down to the courtyard. Use your hidden blade to kill 5 of them within 5 seconds. This will earn you two trophies / achievements at the same time.

You should make sure to have some parachutes before doing this. They can be bought from tailors. Search for a viewpoint with some ziplines nearby. The one in the video is in the imperial district and works very well. When you jump off the viewpoint press Square (PS3) / X (Xbox 360) immediately. This will open the parachute. Once you are over the zipline, press Circle (PS3) / B (Xbox 360) to release and quickly hold Circle / B to grab the zipline.

You can easily get the ingredients by opening bomb crafting stations that are scattered all over the city. Moreover, you should get a Cherry Bomb to lure multiple enemies. You can either craft it or buy it. Use the british gunpowder to attract enemies from a larger radius. Head over to the Fatih Camii building (you can travel there by using the tunnel entrances) and climb the rooftop. In the courtyard are 8 guards. Throw Cherry Bombs until more guards come in. Then throw the datura bomb when they are standing close to each other.

42. Mouse Trap (20G) – Kill 5 guards with a scaffold after they have been stunned by caltrops.

You don’t need to kill 5 at once, just 5 in total. Caltrop Bombs can be bought from all Black Market Dealers around the city. Search for a destructible scaffold and get into a conflict with some guards. Lure them near the scaffold, select the caltrop bomb in your weapon wheel and throw it with Triangle (PS3) / Y (Xbox 360). Run towards the edge of the scaffold and press Circle (PS3) / B (Xbox 360) to bring it down. Let them kill you and repeat the process a couple of times.

45. Almost Flying (20G) – Parachute directly from the top of the Galata Tower to the golden horn.

The Galata Tower is the building you climb in Memory 3 of DNA Sequence 2. It’s the highest building on the northern part of the map, right in front of the Assassin’s HQ. Make sure that you got some parachutes (can be bought from tailors). Jump and glide towards the water. Press Square (PS3) / X (Xbox 360) when you jump off. This will open up the parachute. You need to keep flying until you drop into the water automatically.

Replay DNA Sequence 1 – Memory 5. After the cutscene in the very beginning you’ll need to fight 3 soldiers. Select the throwing knives in your weapon wheel and hold down Triangle (PS3) / Y (Xbox 360) and release the button to throw 3 knives at once.

Go to Fatih Camii (you can travel there by using a Tunnel Entrance). Go up the rooftop and you will see 8 guards in the courtyard. Use a Cherry Bomb to group them up. Once they are close together you throw a Smoke Bomb and jump down to the courtyard. Use your hidden blade to kill 5 of them within 5 seconds. This will earn you two trophies / achievements at the same time.

Search for a guard that is near a large group of civilians. Patrolling guards that come across markets work best. Poison him and throw money on him (select throw money in the weapon wheel). This will attract the civilians and the guard will begin to knock them out when they are nearby.

Duccio (even his name sounds like douche) can be found in DNA Sequence 4 – Memory 4, on the most West side of Constantinople in the Constantine District. In case you can’t find him replay this memory and go to the shown location (map is in the video) next to the closed well, where he’ll be stumbling around like the drunk he is with alcohol in his right hand. Use your fists in the weapon wheel and knock him out with punches. That’ll teach him to call Ezio’s sister names in the last game’s Da Vinci Disappearance? DLC!

For trophy guide videos, please check the achievements section above.

More video guides will be added when they become available.

Thanks to PowerPyx for the guide videos.