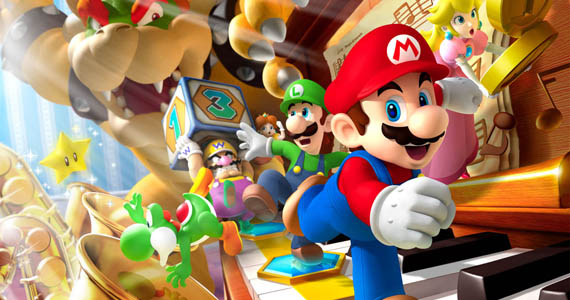 This Mario Party 9 preview gives a quick look at what can be expected from Nintendo’s upcoming party video game.

Mario Party 9 is an upcoming party video game exclusively for the Nintendo Wii. It is the fifteenth installment of the Mario Party series, the eleventh in the main series, and the second for the Wii, the first being Mario Party 8.

Officially announced at E3 2011 the game is currently under development and an official release date has yet to be announced.

Here is a list of key elements that will be available in Nintendo’s Mario Party 9 based on news and announcements made so far.

Like previous Mario Party titles, four players take part in each game, composed of a virtual board, and move around a variety of themed lands to collect coins and stars, while avoiding certain spaces. A new feature is that all four players will move around in a car. Minigames will re-appear and are the main focus of this installment unlike the last game.

Boards
Unnamed grassy area that resembles World 1 of New Super Mario Bros. Wii with windmills, a Fortress, and a Beanstalk. It also has an underground passage with falling platforms that resemble Donut Lifts.