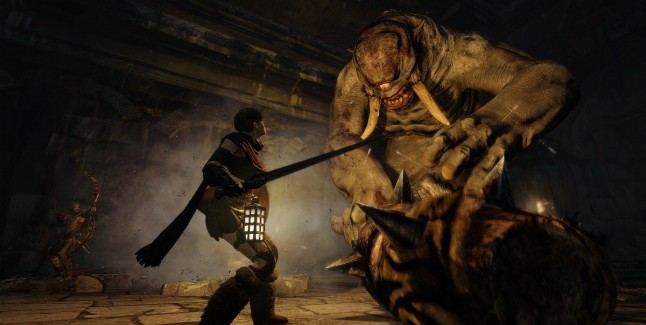 This Dragon’s Dogma preview gives a quick look at what can be expected from Capcom’s upcoming open world fantasy video game.

The player takes on the role of a nameless hero or heroine whose fishing village is attacked by a fearsome dragon. After discovering you are the chosen one through the creature, your heart is savagely ripped out. Miraculously surviving the attack, you are reborn as the ‘enlightened one’ and must seek out the dragon that stole your heart.

The developers of Dragon’s Dogma sit down in this interview to talk about the plot, combat and world of the new action fantasy game!

Take a look at the gameplay of Dragon’s Dogma.

And this trailer will educate you on the game’s pawn system, which allows you to customize your allies!

Here is a list of key elements that will be available in Capcom’s Dragon’s Dogma based on news and announcements made so far.

Character Customization
The player will be able to select between various types of characters, of which three have been revealed so far: the attack-focused fighter, the magic-focused mage, and the speedy strider. Gender choice and appearance settings will also be available.

Grab
The game will feature a “grab” action, where the main character can grab on or cling to enemies. The player can also use this feature for more advanced attacks. For example, the main character can either grab on to a giant griffon’s legs and attack it directly, or climb up to reach the top of its head for a more lethal blow.

Scale
In addition to the large open world, Dragon’s Dogma will also feature a large main city environment with over 200 NPCs who will move about according to their own time schedules. The player will be able to communicate with the residents in full voice. Players can also look forward to anywhere between 30 and 100 hours of game time in Dragon’s Dogma.

Be sure to check out our Dragon’s Dogma Screenshots Gallery!