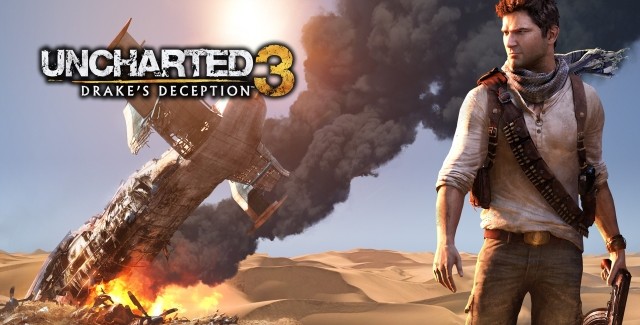 The time has come for Naughty Dog’s third installment in the Drake saga. But is it a blockbuster hit or a box office flop? We’ll be taken a look here in my Uncharted 3: Drake’s Deception review.

In Uncharted 3: Drake’s Deception a search for the fabled “Atlantis of the Sands” propels fortune hunter Nathan Drake on a trek into the heart of the Arabian Desert. When the terrible secrets of this lost city are unearthed, Drake’s quest descends into a desperate bid for survival that strains the limits of his endurance and forces him to confront his deepest fears.

So lets take a look at all this action in my video review.

Now lets take a look at the scores.

Years of practice does make perfect. Drake has remained Drake with only a few extra tweaks to his looks and animation, leaving you with the same fantastic gameplay intact. And why fix it if it ain’t broke? It works seamlessly, delivering a great gameplay experience.

Online play also delivers a first class online shooter that will have you hooked with tons of customization options and rewards available. Who needs to be playing the same old war-based shooters, when Uncharted 3 delivers all that fun and more; together with the same cinematic action you’ve come to love from the single player.

Again, sticking to their guns Naughty Dog has only done a few things to make Drake better: Improved motion capture really gives player models a fantastic feel, and graphics-wise it’s the same as the second with just a little more shine.

True to its style the sound is as Hollywood as a game could get and one soundtrack I’d be happy to have in my CD player anytime.

WOW, okay that wasn’t descriptive but it was my honest initial response to the 3D feature in Uncharted 3. There isn’t a hint of ghosting that’s plagued earlier 3D titles and the amount of depth is breathtaking. Playing through the 18th chapters desert level was simply jaw-dropping in 3D.

This is a must own for all PS3 users it has something for everyone, the story, the thrills, the music and the actors tie up what could only be described as an epic affair. So why are you still reading this? Go and get it NOW!!