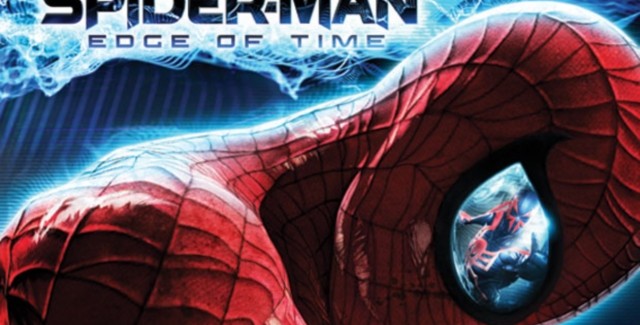 It’s time to join our favorite web slinger once again on another adventure that features a split in the fabric of time, has Spider-Man: Edge of Time got enough to seal itself as a future… or is that past hit? I get confused sometimes with all this continuum stuff. 😛

So lets get into the video review shall we.

Can the past really change the future an interesting concept but how does it score? Lets see.

The developers have done us proud here taking all the best elements of their previous Spider-Man title and losing the bits that didn’t really work applied some great new mechanics like the effects of future and past events and wrapped them all up nicely in spider web for us, this isn’t to say it’s a perfect game though like previous the combat is still a little dicey at time leaving you feeling like you’re just pounding a controller instead of engaging in a battle so it tends to feel a little tired at some points, but on the whole a very enjoyable experience for spidey fans once again after last year’s Spider-Man: Shattered Dimensions.

This is simply put one of the best looking Spider-Man titles to date everything from the ground up looks fresh and crisp with really smooth animation and attention to detail that will have comic fans drooling, time to geek out people.

filled with the usual assortment of electro tunes you’d expect from the year 2099 and all the dramatic set pieces you’d find in any spidey movie but sometimes a little bit lack lustre when it comes down to the combat sections I know punching only really makes a whacking sound but it seems like the same whack, grunt, whack, grunt all the time.

As for voice-acting all the one liners are delivered greatly and they’ll keep you entertained whilst you put up with whack, grunt of the battles.

Same fun as Beenox’s previous spidey title and a must own for all Spider-Man fans! The puzzles involving the use of time are refreshingly different and with just enough head scratch to keep you entertained, but not that much that you’ll be driven mad. An all-round good web slinging adventure.