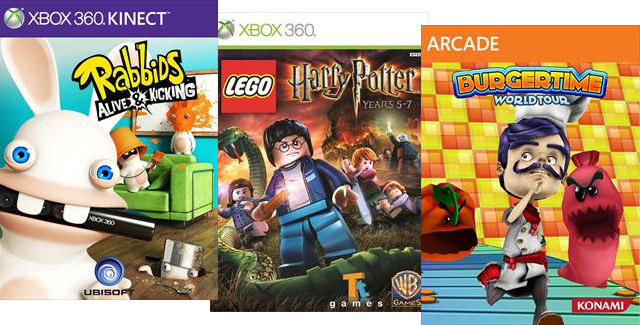 Content: BurgerTime World Tour
Price: 800 Microsoft Points (that’s US$10 / €9.60 / £6.80 / CAN$12.40 / AU$13.20)
Availability: Check availability in your Xbox LIVE region
Dash Text: An all-time arcade favorites gets a second helping as BurgerTime World Tour elevates classic gaming to the next-gen universe. Hero Peter Pepper returns and traverses the globe challenging chefs from around the world. Gamers will tackle 50 total levels and boss fights in each of the four environments. For the first time ever, the game will also feature online and split-screen multiplayer modes for four players with online leaderboard and avatar support. BurgerTime has never been more meaty!

Content: Raving Rabbids: Alive & Kicking Demo
Price: Free
Availability: Check availability in your Xbox LIVE region
Dash Text: The Rabbids have already invaded the past, the world, your TV, the moon, and now they are set to invade your own home, coming out from the floor and interacting with you through ridiculous and humorous physical challenges. This year with the augmented reality, watch as the Rabbids mess with your life in front of your eyes! For the very 1st time on Kinect, play up to four players simultaneously in a flood of crazy game modes! Have you ever imagined getting so close to a Rabbids that you could slap it, kick it, knock it out and generally have fun with it? You can now with the Augmented Reality enjoy that on Kinect. Jump, roll, slap, dance and more to stop the Rabbids invasion! Go face to face against them with the craziest moves through dozen of new mini-games.

Content: Deepak Chopra’s Leela Demo
Price: Free
Availability: Check availability in your Xbox LIVE region
Dash Text: Welcome to the Deepak Chopra’s Leela game demo. Leela is a groundbreaking journey that helps brings focus, energy and balance to everyday life. Explore seven movements to engage the seven chakras — or energy centers — to unwind and develop a “flow state.” With Kinect, users can actually see and measure their breathing to enhance their meditation. Create personal “mandalas” – artwork that expresses a person’s essence — and use them as meditation maps or share with friends on Facebook.

This week, Xbox LIVE Gold members can save Microsoft Points on an assortment of select Marketplace items. The special pricing will be available until November 7th. All of the below are 50% discounted.
* LIMBO
* Dishwasher Vampire Smile
* Avatar – Skeleton Costume
* Death by Cube

New on the Avatar Marketplace: