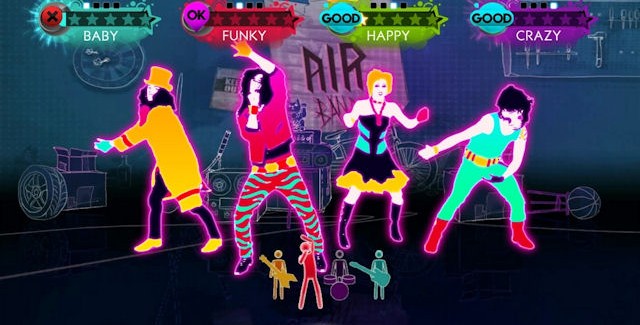 It’s time to boogey on down in my foot shuffling review of Just Dance 3. Are you ready to PARTY!?

Just Dance 3 kick-starts the party with over 45 tracks from multiple genres and popular artists including today’s hottest hits like “Party Rock Anthem” by LMFAO, “California Gurls” by Katy Perry featuring Snoop Dogg, and “Forget You” by Cee Lo Green. Also included are legendary favorites like “I Was Made For Lovin’ You” by Kiss.

With a variety of all-new gameplay modes, tracks with 4-part choreographies that allow up to 4 players to uniquely shine, and innovative cardio options, Just Dance 3 was made to keep the world dancing!

So lets jive our way into a video review.

Okay I’ll steer clear of the dance references while we deal with the scores.

Just Dance 3 isn’t here to blow us away with a million polygon renders of real life dancers, but it’s fun fresh and the UI is very clear and perfectly suited to the game, making for great fun.

Some games will always stay at the top of their game and Just Dance 3 shows why it is the Lord of the Dance game genre, this is everything its 30 million fans have wanted with enough extras to keep you rocking out in your living rooms until the next installment.

Well, what did you expect? A dance game to score on sound, the track choices are widely varied to keep everyone at the party happy and current enough so it doesn’t feel dated. Great stuff!

As far as Dance games go this is the best of the bunch, with a huge variety of extras like the function to record your own dance being my favorite. It goes without saying that this game can really bust a move.