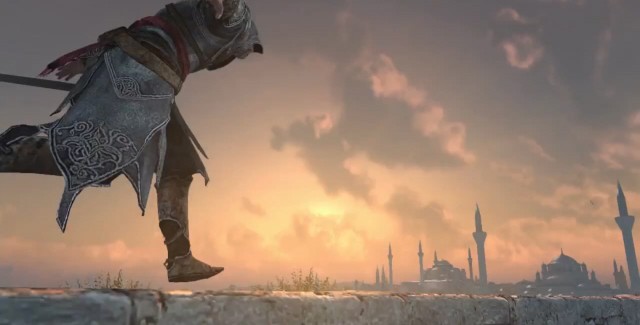 First up, is the existence of an all-new Tower Defense minigame (or “Den Defence”) that players will take part in throughout the single-player adventure. During this section, players will have to line up troops with different long-range weapons in order to defend the headquarters against the oncoming waves of Templars using Crossbows and Cannons! Yup, it’s Tower Defense, Assassin’s Creed-style!

Let’s follow-that up with a badass new trailer for the game with some intense music and focus on grisly attacks. I’ve always loved trailers like these, they make the game look so cool. As if it wasn’t already. This trailer is called “Two Assassin’s, One Destiny”.

This trailer reveals another new features of Assassin’s Creed: Revelations, Bombcrafting! In the game you can mix and match ingredients to create all manner of different bombs with different effects! Collect the ingredients around the city, and then mix a shell, gunpowder and objects inside to create your favorite bomb. Bombs shown include: Caltrop Bomb, Pyrite Coin Bomb, Smoke Signal Bomb, Splinter Bomb, Tripwire Splinter Bomb, and Cherry Bomb. Awesome!

Last but not least, here is a Assassin’s Creed: Revelations developer diary that focuses on the Multiplayer aspect of the game. They talk about the new customization options, which let you heavily customize your character with all manner of looks, and even choose your Weapon; which will change the animations for your character. They talk about Leveling, and how you can use credits to level-up your character with new weapons and abilities, they’ve added the new Friends Hub feature, which allows you to see the stats and favorite abilities that your friends use, which will give you a tactical advantage by planning ahead based on their stats. Finally, they discuss the Beta and what the developers have learned and the improvements they’ve made based on that feedback.

Now for an epic story-based trailer! This trailer is called “End of An Era”, and it gives you a highly cinematic and story-based look at Assassin’s Creed: Revelations. I don’t know which trailer I love most, this one or the “Two Assassin’s, One Destiny” trailer.