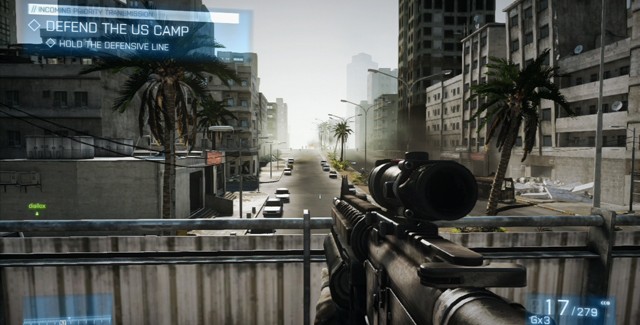 A number of high valued POWs are being detained at a US camp. A recent earthquake has weakened the camp’s defensive perimeter and made it vulnerable to PLR attacks. An evacuate order of the camp has been given. You and a handful of marines are assigned to defend the camp until all personnel have pulled out.

Mission 2: Fire from the Sky on Hard

An American convoy escorting a general privy to classified intel has been ambushed on their way back to base. The general is being held captive in a remote mountain village. You will be providing close air support for a strike team sent in to rescue him.

Thanks to extensive intelligence work, we’ve been able to locate El Zakir. He was not expected to give himself up, but when local agents located and captured his immediate family, he agreed to negotiate his surrender. El Zakir is awaiting extraction in an apartment complex in the outskirts of Baghdad. You need to secure him and bring him back to the Green Zone.

Mission 4: Hit and Run on Hard

The company El Zakir referenced is Levin Cooperative. It’s located in central Paris. You need to go in and retrieve everything you can from their offices. A private security team has been alerted to your presence and is headed to the offices to stop you. You need to secure and extract whatever evidence there may be.

A hostage situation has developed in Paris. It’s confirmed that Abu Muhammad is on site orchestrating the operation. French police have requested our help. We are sending you to assist. You need to provide sniper support, free the hostages and neutralize Abu Muhammad.

Mission 6: The Eleventh Hour on Hard

The attack has started. We’re confident this is the main attack referred to by El Zakir. Witnesses claim bomb like devices have been left in the metro and the Paris Stock Exchange. If Abdul Rahman is behind this attack, we expect it to be similar to the one that took place in London several years ago. You will be assisting the French police to locate and disarm the bombs and neutralize Rahman if the opportunity presents itself.

Please comment below if you need help or have any questions for our Co-op Walkthrough. Thanks for visiting!