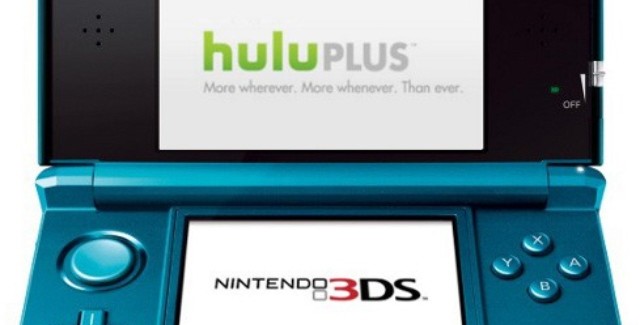 Both Hulu Plus and 3D Video Recording will be released to 3DS owners at the end of November announced Nintendo vid a new firmare update that adds a variety of new features and services.

Hulu Plus will be available for both Wii and 3DS owners at a cost of $8 a month with limited advertising.

With Hulu Plus, Wii and Nintendo 3DS users will be able to instantly stream thousands of TV episodes – including the entire current season of popular shows like Modern Family, Glee, Dancing with the Stars, The Biggest Loser, House and Grey’s Anatomy – from premium content partners like ABC, Comedy Central, FOX, NBC, MTV and many more. Hulu Plus also offers access to classic TV favorites like Lost, Battlestar Galactica, The Hills and hundreds of popular and award-winning movies. Hulu Plus joins Netflix which is already available on 3DS, ensuring that a huge array of content in the form of TV shows, movies and videos is instantly available via Nintendo’s portable. Although it’s important to note that both Hulu Plus and Netflix do not work in stereoscopic 3D.

At the end of November, a new system update will deliver a range of cool new features and enhancements, including 3D video capture, which will let users record up to 10 minutes of 3D video and enable people to create their own 3D stop-motion animation videos. The update will also add new puzzles to the StreetPass Mii Plaza and a new dungeon to Find Mii.

Along with these announcements are new 3D Animations and 3D Music Videos that will be added to Nintendo Video on 3DS.

3D Animation: Starting today, Nintendo 3DS owners can visit the Nintendo eShop and, for $1.99, download a new 3D “Thriller” video that features singing and dancing by their favorite Shrek characters from DreamWorks Animation.

Additionally, you will soon be able to download a series of unique 3D video clips from Red Bull and a range of fun and engaging WATTS sports videos from Eurosport. Early next year will also see the launch of hilarious and exclusive 3D Shaun the Sheep short films from Aardman, the creators of Wallace and Gromit.

3D Music Videos: Fans of the Nintendo Video service on Nintendo 3DS will soon see the arrival of new 3D music videos, including “Don’t Stop (Color on the Walls)” from Foster the People’s Torches album.

Really glad to hear that Nintendo is adding 3D Video Recording soon. I think this is a pretty big feature. And while it sucks that your limited to recording only ten minutes, that’s much longer than I would’ve thought Nintendo would allow. So good on them!