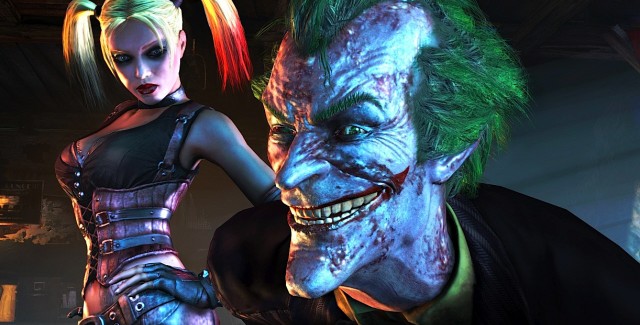 Here’s a video showing some of the hints for Batman: Arkham 3.

During the Steel Mill located at Joker’s funhouse, you can find a costume for Harley Quinn. Laying on the floor next to it is a pregnancy test… the result? POSITIVE.

After the final part of the credits roll, you’ll hear Harly Quinn singing…. this is a subtle hint that Harley Quinn, and her baby (with Joker as the obvious father) could be the focal point for Batman: Arkham 3.

You can overhear one of the Joker’s henchman talking about how he had seen Harley doing some “nasty” things to The Joker. Nasty=sexual. Right?

Mark Hamill has publicly stated that he may not be doing any more voice acting for The Joker character from Batman. He is the long-running voice of Joker and got his role in the 90’s animated series. If this really is true, then putting the focus on Harley Quinn as a replacement for Joker, and having Joker’s son be the new villain, would get around the fact that Mark Hamill is no longer the voice of Joker.

Azrael talks about batman being the hero that will soon “close Hell’s gates”. — Thanks to scuba steve for this tip!

At the Spike’s TV Video Game Awards 2011, The Joker wins character of the year award. During The Joker’s CGI acceptance speech, he’s holding the Batman: Arkham World script while saying “I don’t suppose I’ll be needing that anymore, will I? Oops! Spoilers!”
It was later confirmed this was a joke, but you never know. Watch the video here. – Thanks to marcus123 for this tip, I had almost forgotten about it.

In January 2013 Warner Bros. registered new domain names for a Batman movie and/or tentative titles for the next Batman game(s). Here’s the list of possible sequel names…

At a February 2013 investors meeting Warner Bros confirmed the “Batman Arkham 3” release date is in 2013! Which may be Fall 2013 or if it’s fiscal year then it may not arrive until March 2014.

To quote: “And we also have a strong games release this year, which will include the next release in the Batman Arkham franchise. So all in all, we expect Warners to post another very strong year in 2013.”

However, the third game will not be developed by Rocksteady, since their next game is not a Batman title.