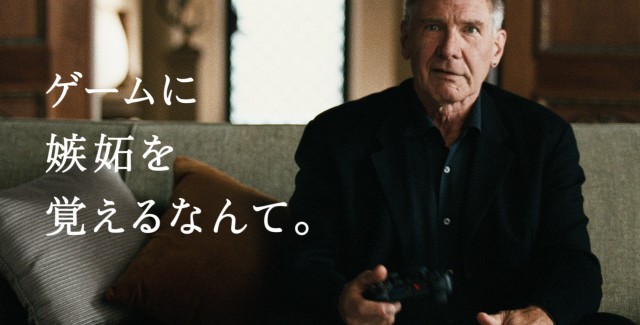 In the Uncharted 3: Drake’s Deception commercial, which starts airing on October 22nd, Harrison Ford is seen playing the game and getting absorbed in its world. He then states how jealous he is of the game’s enjoyable epic adventure. The commercial ends with Harrison Ford painting the word incredible in Japanese (Sugee).

Naturally, Harrison Ford makes the perfect pitchman for Uncharted given the similarity between Ford’s famous Indiana Jones character and that of Nathan Drake, who was partly inspired by Indy. This new commercial also marks Harrison Ford’s first Japanese commercial in four years.

Some comedy insued at the prospect of Harrison Ford actually having to play the game to shoot the commercial. Since the guy is up there in age, as you’d expect, he doesn’t play videogames himself. But Sony quoted him as saying, “The game really gave me the feeling that I was in a movie, but it’s enjoyable because while I always win in my movies things don’t necessarily go so well in the game.” And also praising Uncharted 3 for it’s graphics fidelity, imaginative world and realistic character interactions.

The Uncharted 3 release date is set for November 1, 2011 in America, November 2nd in Europe & Japan, and November 3rd in Australia. Exclusively for PS3.

Here’s a much longer version.

And here is the making of the Uncharted 3 Harrison Ford commercial.

Uncharted: Golden Abyss meanwhile launches alongside the PS Vita in Japan on December 17th, and in America & Europe on February 22nd, 2012.