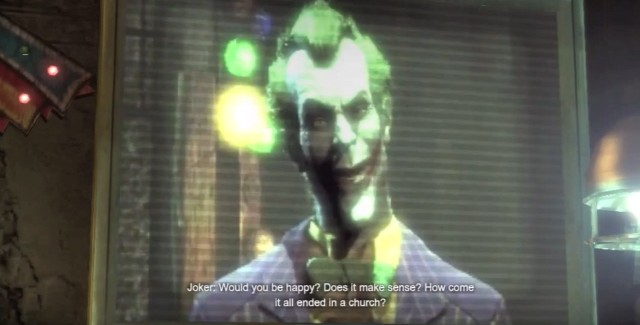 Looking for Batman: Arkham City Secrets and Easter Eggs? As you’d expect with a game that is as large as Arkham City and took so long to make, developer Rocksteady has packed the world of Gotham with many details. Among them are all kinds of hints and subtle secrets and hidden Easter Eggs for fun and devious players to discover.

Reference to the LOST TV Show

You can find a reference to the hit ABC TV Show “Lost” within Batman: Arkham City! At one time Lost was the most popular television series of all time. So popular in fact, that even The Joker, voiced by Mark Hamill, is a fan!

You’ll find the reference during The Joker’s small speech within the main campaign. But you have to be paying attention or you’ll miss the reference!

This video shows the Lost Reference in Batman: Arkham Asylum during The Joker’s Speech.

“How come it all ended in a church?”

Oh and on a related note, at random you can hear thugs saying: “I forget, do they ever explain what the island WAS?”

This secret ship hatch can be found in the Industrial District at the North Gotham Dock, on the wooden ship next to the buoy with the red blinking light. Stand on top of the square wooden entrance hatch at the front of the ship (closest to the buoy). Now you must target the access door by hacking into the Gotham Municipal Network with the security password “CITYOF TERROR”. Then the ship’s hatch with slide open and you can go down the stairs into the eerie ship’s hold.

Head over to the Crime Alleyway, southwest of the Church / Medical Center (on your map, it’s above the letters saying Restricted Area). You should see two crayon silhouettes on the ground (those stand for the parents of the protagonist Bruce Wayne). Right next to them is a rose. Make sure that the area has been cleared out of enemies and activate the rose. Batman will kneel down and music will begin to play. Don’t do anything for 1 minute and the Trophy / Achievement will pop up saying “Pay Your Respects – A moment of remembrance”.

There’s a Lightsaber from Star Wars in the Circuit Box that Batman finds in the DeadShot side mission.
I’m sure I don’t need to tell anyone this is likely a reference to Mark Hamill, who voices the Joker in the game, of his role as Luke Skywalker in the original Star Wars trilogy.

Do you know of anymore Secrets or Easter Eggs hidden within Batman: Arkham City? If so leave a comment and we’ll update this page and give you credit!