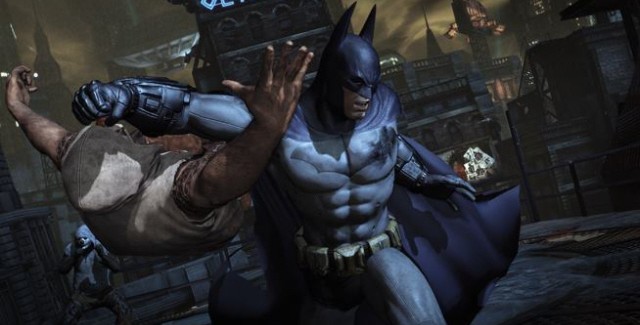 Our Batman: Arkham City Achievements guide & Trophies guide lists every Achievement & Trophy for this Xbox 360, PS3 & PC Science fiction action RPG, FPS and tells you how to get and unlock them.

Early in the game when you enter a church and find the Joker’s thugs there, the game will tell you to “Use a Smoke Pellet to escape when discovered by armed enemies.” When you throw a Smoke Pellet as instructed, and sneak up behind the enemies and take them down from above without being seen, when you take down all four thugs that’s when you’ll unlock this achievement.

4. Chimney Sweep (10G) – There is only one way in.
5. One Armed Bandit (10G) – Hammer the point home. – This is a story achievement that you get when you beat Mr. Hammer AKA the One Armed Bandit. Battle him and some other thugs, you can take him down by zapping him a few times with an Electrical Charge, and then pounding away.

This is an unskippable story achievement. Each jamming tower has 3 terminals attached. Destroy all three to shut it down and unlock the achievement.
1. On top of the Museum,
2. Up on the opposite side of the road,
3. In the Subway, past the TITAN container.

7. Gladiator (10G) – Last man standing. – This is a unskippable story achievement that you get when you beat the Infected Titan fight inside the Museum’s Gladiator Pit where you battle him and some other thugs.
8. Wrecking Ball (25G) – Stop the unstoppable.
9. Lost And Found (10G) – Uncover the secret of Arkham City. – This is an unskippable story achievement taking place in Wonder Avenue. As you pass the second door into Wonder City (open them with an electric shot fired at the mechanics at the bottom in front of each door) be careful of the three sword swinging ninja ladies.
10. Sand Storm (25G) – We are legion.
11. Hide And Seek (25G) – A deadly game of hide and seek. – This is another unskippable story achievement that you get when Batman fights Mr. Freeze.
12. Ghost Train (25G) – Fight for survival.
13. Freefall (25G) – Don’t look down.
14. Exit Stage Right (50G) – All the world is a stage.
15. Forensic Expert (10G) – Collect enough evidence to locate the gun for hire.

This will be earned by finishing the “Shot in the Dark” Side Mission. You will need to track down Deadshot. You need to locate 3 of his victims and scan the area for evidence. Remember, that it will take some time until the next victim will be available. Simply fly around the city or keep doing some side missions / follow the main plot. Once you investiagated all 3 crime scenes you will have to check out 3 different places to find Deadshot’s equipment. Go the the norther area to find his weapon and PDA. The rest should be simple, save the last victim and defeat Deadshot. Along the way you will also earn the forensic expert trophy / achievement (Collect enough evidence to locate the gun for hire).

You will need to complete the Identity Thief side mission. After progressing in the main plot, an exclamation point should appear in the south-western part of the map, above the subway and near the restricted area, in an alleyway. That’s where the mission will start. You will need to gather clues by finding victims. All locations are shown in the guide video.

The mystery watcher appears after some specific events in the main plot. Here are the four events after which he or she appears:
1. After leaving the building where you saved Catwoman.
2. After meeting joking for the very first time, he’ll be on the Ferris wheel.
3. After interrogating the major.
4. After saving the reporter.
5. You can’t do this in the beginning of the game, but you don’t need to worry if you miss one of these locations. He’ll still spawn after finishing the main plot. Make sure that you really scan the glyphs after talking to the mysterious watcher. Once you got all 4 of them, the final location will be revealed.

You’ll find this where Bane asks for your help in locating the TITAN Containers around Arkham City. This video guide will show you the Distress Flare location.

You must locate and destroy each of the six Titan Containers in the Bane Sidequest. After finding them all (they are indicated on your map as you cross Arkham City), meet up with him at the Krank Co. Toys building and Bane will have the next six found as well. Destroy them and you’ll earn this Achievement! The “Broken Toys” Achievement worth 25G is shown at 2:50 in this video.

Early on in the game when you’re tracking the Joker’s Signal, after you reach the Amusement Mile, is when you’ll first hear a payphone ringing. Tap the left trigger button on your controller to locate Victor Zsasz’s ringing phone. Pick up any ringing phone to unlock the achievement.

Towards the end of the game you will receive a side mission from Mr. Freeze, called ‘Heart of Ice’. You will have to find Nora Fries in order to complete the quest. Head to the industrial district in the southeastern part of Arkham City. You should see a marked area of Nora’s estimated location. There is a well guarded building with a locked front door. When standing in front of this building, fly north and land on some kind of ship. Use the freeze blast on the water to create a sheet of ice. Use the batclaw to navigate to the destroyable wall and use the explosive gel to blast free your way inside the building. The rest should be simple. Beat up the guards and head back to Mr. Freeze.

43. Gotham Base Jumper (5G) – Jump off the tallest building in Arkham City and glide for 1 minute without touching the ground.

Towards the end of the game you will be able to enter the restricted area. Simply follow the main plot to find out how to climb the Wonder Tower – which is the highest building in the game. Now glide straight towards the church. You will turn around automatically when you are about to leave the restricted area. This will keep you on a constant height. Simply repeat the process of turning around.

Head over to the alleyway, southwest of the Church / Medical Center (on your map, it’s above the letters saying Restricted Area). You should see two crayon silhouettes on the ground (those stand for the parents of the protagonist Bruce Wayne). Right next to them is a rose. Make sure that the area has been cleared out of enemies and activate the rose. Batman will kneel down and music will begin to play. Don’t do anything for 1 minute and the Trophy / Achievement will pop.

Where is the location of Calendar Man: In the Soloman Wayne Courthouse (the courthouse in the beginning of the game when you rescue Catwoman, who is hanging over a pit of acid, from Two-Face), you can talk to the Calendar Man, who is locked up in the basement. You will notice a calendar on the wall next to his cell with 12 days circled. January 1st (New Years Day) February 14th (Valentines Day) March 17th (St. Patrick’s Day) April 1st (April Fools Day) May 13th 2012 (or May 8th 2011) (Mothers Day) (Be sure to adjust the year) June 19th 2011 (Father’s Day) (Be sure to adjust the year) July 4th (Independence Day) August 16th (Feast Day of Saint Roch) September 5th (Labor Day) October 31st (Halloween) November 24th 2011 (Thanksgiving) (Be sure to adjust the year) December 25th (Christmas).
Progress check: If you talk to Calendar Man on each of these days, he will tell you a story about someone he murdered on that day. The corresponding month will also be crossed off the calendar.
How to get this achievement quickly: Disconnect your console from the internet, and change the consoles system date. Then speak to Calender Man, and then walk out the back door to get the game to save.

46. Catch (5G) – Find someone to play remote Batarang catch with.

This can only be done with the mystery watcher / mystery stalker. The first chance to get this appears right after saving catwoman, when exiting the courthouse for the first time. Simply throw your remote Batarang towards the mystery watcher and wait for him to catch it.

You can easily do this during the combat challenges. The second one, called Survival of the Fittest works perfect. Play until you reach round 4 to make sure that you are surrounded by enough enemies. Simply jump over one of the enemies and land one hit. Repeat the process of jumping and attacking and you will be done after 2 minutes.

48. Perfect Freeflow 2.0 (5G) – Perform a perfect combo including all of Batman’s combat moves (any play mode).

There is a total of 13 combos you have to perform! It is highly recommended to buy all of the Combat Upgrades before doing this. You will be able to perform Special Attacks after 5 hits instead of 8. Make sure that you do everything in one single combo, so don’t let your combo multiplies in the top left corner break.

You can find video guides for trophies in the achievements section above.

Head to the mission after you have gone to your apartment. It’s at Poison Ivy’s Lair.

This page is a work-in-progress: More guide videos & tips will be added as they become available.