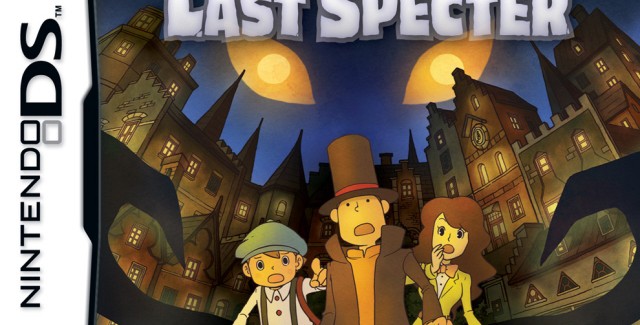 This Professor Layton and the Last Specter walkthrough will guide you through the beginning to ending moments of gameplay with strategy tips for this beloved Adventure game series of brainteasing puzzles and RPG gameplay for DS (Also plays on 3DS!).

All of the aspects of the series that fans have grown to love and adore return once again in Professor Layton and the Last Specter, including interesting puzzles ranging from Brain Teasers to Conundrums to Riddles, the return of your favorite characters, an incredible music score, engrossing animations, tons of full-motion video animated movie scenes, an amazing amount of spoken dialogue from your favorite characters and great graphics. Additions to the series include an all-new in-game help system and a redesigned in-game inventory. This game also features the return of free weekly downloadable puzzles as Downloadable Content released post-launch!

Index of Professor Layton and the Last Specter Guides:

Professor Layton is Back with a Puzzling Prequel – The 4th entry in the Professor Layton series of adventure games begins an all-new prequel series, so fans can see where the adventure started! The storyline is set three years before the events seen in Professor Layton and the Curious Village. The game begins with Professor Hershel Layton being delivered a letter from an old schoolmate of his named Clark Triton. This letter tells of a mysterious Shadow Giant that appears and wrecks havoc in Clark Triton’s home town. Layton then heads off towards the town of Misthallery with his new assistant Emmy in tow in order to investigate this mystery. Could this latest event of the shadow creature’s destruction be linked to the folklore of the village involving a “specter”? Find out in Professor Layton and the Last Specter, while also discovering the origins of how Professor Layton first met his apprentice, Luke Triton!

Bonus RPG: Professor Layton’s London Life – A bonus 100-hour RPG is included along with the single-player quest at no extra charge! This fully-featured 8-bit RPG campaign is available to play in full from the moment you pop the game cartridge in, and is a fully seperate adventure! A number of your favorite characters are featured and players are able to customize their main character with special clothing items. Many Items and furniture can be discovered and unlocked. These items must be used as players explore the town, talk with and help villagers, and are used to gain access to new areas of the city and perform tasks that will help the villagers in need. It’s like having two full games in one! Enjoy!

Part 2 mostly focuses on tutorials. We arrive in the town of Misthallery and do a bit of exploring. We learn about Hint Coins and how to Navigate using the Shoe Icon in the lower right. We also get the Trunk (icon in the upper right) which houses a lot of information. We take a look at the first journal entries and watch the first “Episode”.

In part 3 we finally get to explore the town a bit. We also run into an impassable bridge that serves as a story puzzle where you must cut the rope in exactly the right spot. We also have a tough time solving Puzzle #2: Tourist Spotting.

In part 4, we tackle Puzzle #3: Pick A Package which nearly picks US apart. As we figure it out, barely, we’re dropped into a brainteaser that gets the best of us in Puzzle #4: Reloading the Cart.

In part 5 we finally solve that very frustrating cart puzzle. Following that, we get blocked off by a determined police officer who wants us to solve five puzzles before he’ll let us pass… and we get a glimpse at the library. Although we can’t get inside. Finally, we meet Bucky. Bucky and his boat. And a puzzle…

In part 6 we try and deduce why animals need to cross rivers…. Animal Crossing! Get it? After finally beating this tough puzzle (either that or my brain sucks), we finally make it to the Mayor’s House! And who exactly is the mayor?

In part 7 we finally get to meet the big cahuna who has been the main goal up to this point, Mr. Triton! Who is also the Mayor. But before meeting Clark and learning some more backstory, we must solve two puzzles. Puzzle #6: The Mailbox Panels and Puzzle #7: Mopping Up!

In part 8, Luke has been in a funk lately, and we head out to meet the young future-apprentice. But before we can reach him, we are forced to solve a “Door Puzzle” that doesn’t require us doing anything. Hmm. We also learn that Luke may have supernatural powers! Can it really be? Finally, we solve Puzzle #8: Mirror Ballroom.

We finally exit the mansion in Part 9, and head back into town. We get our first mini-game in the Toy Train, and solve the first track, while also solving Puzzle #9 – Certain Curtains.

In part 10 we go exploring to new parts of town with Luke tagging along and acting as a tour guide. We must head to North Ely and the hotel on Great Ely Street. We also solve a Tetris-style block-siding puzzle to give a rat his cheese in Puzzle #10: Rat Rations.