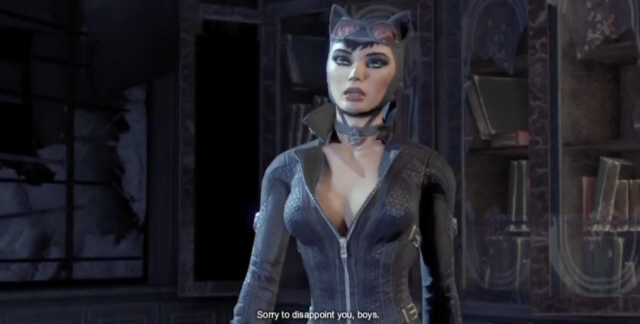 This Batman: Arkham City Catwoman walkthrough will guide you through the beginning to ending moments of gameplay with strategy tips for this alternate character DLC on Xbox 360, PS3, PC and Wii U.

Players will get to take control of the lethal feline during certain points of the game where a heist is the focal point. Unlike Batman, Catwoman is a lot more athletic and her action focuses on acrobatics and melee weaponry using her Claws and Whip. Her Detective Mode is “Thief Vision”.

Stealth Tip: While hanging from the ceiling, Catwoman can drop down on top of enemies walking below her, and take them out silently.

Weapon Hints:
1. Catwoman’s Bolas can be used to knock down unaware enemies, or throw into the environment to create distraction.
2. Throw Catwoman’s Caltrops onto the ground to lay a trap for patrolling enemies.

Two-Face has stolen something belonging to Catwoman. She wants it back.

With the plans retrieved, Catwoman needs to convince Poison Ivy to help her break into Hugo Strange’s Confiscated Goods Vault.

Poison Ivy has smashed open an underground tunnel into the Confiscated Goods Vault. Now, Catwoman needs to take on the elite TYGER guards to pull off the heist of a lifetime.

With Batman saved, it’s time to leave Arkham City, once and for all…

Time to deal with Two-Face, retrieve Catwoman’s loot from her hideout, and leave Arkham City.

If you cannot find Two-Face, here’s where he is:

Here’s a solution Steven found to finding Two-Face: Go to the chamber and climb under that ledge and there should be one of the latch vent type openings under there to get back onto the floor level (where the pink riddle is, behind that fence as soon as you walk in the door). Then look up and you can use her whip to launch up and climb to the other side!

The Two-Face fight from this episode occurs after you have beaten the game, since Two-Face mentions that the Joker is dead.

This boss fight can be really tough, and you can die quickly. I did this a few times, taking out the guards only to find that they freaking respawn! I killed over 6 guys and then I used Thief vision only to see 6 more.

So the strategy to to beat Two-Face is this:

Take out the guy on the right immediately. Then bust the wall open next to there. That will alert the guards and then Two-Face will walk to a different area. You do this because if you try to fight Two-Face on the central bridge, you will be swarmed with enemies.

Once Two-Face moves to his final position, all you have to do is wait it out until all the guards are pretty far away. Then you can beat down Two-Face. You cannot Ground Pound him so you’ll just have to wait until he gets up on his feet.

Thanks to XCV & Steven for the walkthrough videos & tips.