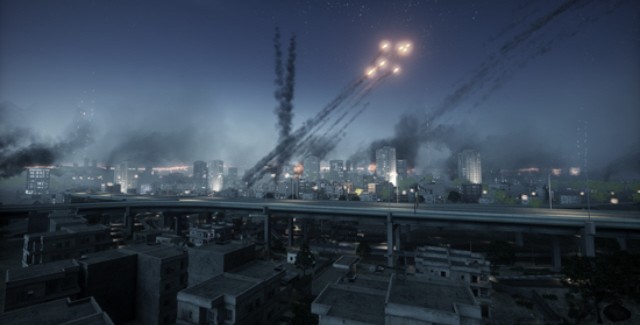 The 9 multiplayer maps of Battlefield 3 have been detailed directly by the developers, who give you the reasons behind their creation and the reasons why the maps have been designed in the way they have.

As well as the major features that make each map stand out from the next.

Here is a video showing off the Operation Firestorm Map. The Battlefield 3 release date is set for October 25th, 2011 in America, 27th in Australia and 28th in Europe.

Story behind the Map: U.S. AND RUSSIA LAUNCH LARGE-SCALE ASSAULTS TO CONTROL IRAN’S BIGGEST SOURCE OF OIL. SECURING THIS AREA WILL OFFER FULL CONTROL OF THE SECTOR AND ITS KEY FACILITIES.

DESIGNER THOUGHTS:
One of our largest and most vehicle-friendly map, Operation Firestorm is the classic Battlefield gameplay taken to the extremes. Size-wise, and with some puzzle skills, you could actually place three Atacama Deserts — one of the largest maps from Battlefield: Bad Company 2 — within the playable area of Operation Firestorm. This is a wide-open desert map where the burning oil fields in one direction are contrasted by clear blue sky in the other direction. Construction sites dotting the area bring interesting possibilities for infantry to hide in elevated positions, spot vehicles, and take them down by mortar or RPG.

Story Behind the Map: HEAVY FIGHTING IS EXPECTED AS U.S. FORCES PUSH TO SECURE THE FINANCIAL DISTRICT IN CENTRAL PARIS. RUSSIAN ANTI-AIR EMPLACEMENTS IN CHARDONNAY PARK ARE LIKELY TO BE THE FIRST TARGET.

DESIGNER THOUGHTS:
Operation Métro is the map from E3 and the Open Beta, so some of you are familiar with it already. It is a map that perfectly illustrates that we want to take our players on a journey. Especially in Rush, you can see how Operation Métro is almost three maps within one: You start out in a lush park, then move into a bombed-out section of the subway tunnels, to finally emerge in a dense urban environment outside the Paris stock exchange. It’s a map that asks you to constantly adapt your class and load out for the diverse situations you will find yourself in.

Story Behind the Map: A FIGHT FOR CONTROL OF ACCESS ROUTES NEAR TEHRAN. U.S. FORCES MAKE A PUSH FROM THE HILLS UNDER COVER OF DARKNESS WHILE RUSSIANS HAVE SET UP DEFENSIVE POSITIONS ALONG THE MAIN ENTRANCE POINTS.

DESIGNER THOUGHTS:
One of the inspirations for this map was a photo of a night time skyline of Tehran which now is basically the same vista that is available in the game. You start up on the hills above the city outskirts and eventually work your way into town. This atmospheric night-time map, where you can see rockets lighting up the sky, has a balanced mix between vehicle and infantry focus. It plays length-wise and starts semi-open with plenty of room for vehicles, but ends on a much more urban and tight note with less focus on vehicles and more on infantry.

Story Behind the Map: A RUGGED MOUNTAIN AREA PLAYS A MAJOR ROLE IN DECIDING WHETHER RUSSIAN OR U.S. TROOPS ARE SUCCESSFUL IN COMBAT OPERATIONS IN THE SECTOR, AS THE AREA IS HOME TO KEY RADAR INSTALLATIONS.

DESIGNER THOUGHTS:
Damavand Peak, internally known as Base Jump, is built on the idea that we want players to be able to base jump, and features our most extreme height differences ever in a Battlefield map. Attackers in Rush and Squad Rush will start high up on a mountain ridge above a mining facility. The only way down into the valley is to somehow make the 500 meter descent. The further the attackers progress in the map, the more vehicle warfare will be present. There is also a large tunnel section dug into the mountain side at the bottom of the map, and the view when you look up at the starting location is spectacular.

Story Behind the Map: THE BATTLE FOR CENTRAL TEHRAN HAS REACHED ITS SECOND WEEK, AND WHAT WAS EXPECTED TO BE OVER WITHIN DAYS NOW CONTINUES AS RUSSIAN AND U.S. FORCES CLASH FOR CONTROL OVER THIS ANCIENT CITY.

DESIGNER THOUGHTS:
We knew we wanted to do something very urban in the city center of Tehran. The fiction has you coming in two weeks after fighting started, so the tight and narrowly built city has a great deal of destruction already when you spawn into the game. Grand Bazaar is a classically mirrored map where both sides have very similar pathways, sideways, and possibilities to traverse heights to get a better view of the action. It’s a very short range close quarter combat map where shotguns tend to be favored.

Story Behind the Map: A RECON RUSSIAN FORCE HAS SET UP CAMP ON THE TURKMENISTAN SIDE OF THE IRANIAN BORDER AND PROCEEDED TO TAKE OVER THE HEAVILY BUILT UP BORDER CHECKPOINT.

DESIGNER THOUGHTS:
Caspian Border was meant to encapsulate the classic Battlefield all-out vehicle warfare gameplay, and also to be a lush and green contrast to the more urban and desert maps in Battlefield 3. The border control splitting the map in two was introduced to add an interesting break both visually and gameplay wise in the otherwise beautiful and open landscape. Caspian Border is one of the obvious map choices if you are after the full vehicle experience, as base distances are generally too long to cover by foot. Pretty much every type of vehicle is available in this map.

SEINE CROSSING
Modes: All
Theme: Paris-based battles both on-foot and in vehicles.

Story Behind the Map: THE AMERICAN INVASION OF RUSSIAN OCCUPIED PARIS IS IN FULL MOTION. THE UPSCALE AREA IN THE 7TH DISTRICT OF PARIS SERVES AS THE BATTLEGROUND.

DESIGNER THOUGHTS:
Seine Crossing has two sections of Paris split in the middle by the river Seine. Seine Crossing has a number of larger roads for vehicles to patrol, while infantry can sneak through tight alleyways and climb staircases to reach second or third levels inside buildings to reach a better tactical position – unless the enemy takes down the building facades. The final M-COM stations in Rush are placed inside a bank building, which is the largest indoor environments of this map and forces the attackers to slightly change tactics.

Story Behind the Map: U.S. MARINES LAUNCH A STRIKE ON A MAJOR HARBOR BY THE NOSHAHR CANALS ON THE IRANIAN COAST. THE STRATEGICALLY IMPORTANT PORT ALLOWS FOR DEEP WATER VESSELS TO OFFLOAD ESSENTIAL MATERIALS.

DESIGNER THOUGHTS:
When we set out to do Noshahr Canals, we wanted to contrast the urban and rural with something more industrial. So we set Noshahr Canals up as an industrial harbor, featuring a mix of infantry, land vehicle, and boat gameplay. The attackers in Rush start out on an carrier ship and can reach the beachhead by amphibious vehicles, boats, and helicopters. All of the bases on the map have an industrial theme but still have different styles, like a train yard, dry dock, or airfield. Compared with the larger vehicle maps in the game, this allows for tighter infantry combat.

Story Behind the Map: KHARG ISLAND IS IRAN’S BIGGEST OIL EXPORT TERMINAL. IF THE U.S. CAN STAKE CONTROL OVER THIS ISLAND, IT WILL DENY THE RUSSIANS CRITICAL ACCESS TO IRANIAN OIL RESERVES.

DESIGNER THOUGHTS:
Kharg Island is our second map with boat gameplay. Thematically it’s representing an assault against Kharg island in the Persian sea, an industrialized island not far from the Iranian coast. The map is slightly more focused on vehicles with longer distance between flags than for example Noshahar Canals. In the Rush game mode, the beach assault begins on the coastline with a well-defended beach you need to break through to create a beachhead for further attacks on the island, before it opens up wider in the later part of the map.

THIS IS HOW WE DO IT – CREATING BATTLEFIELD 3 MAPS

Creating levels at DICE is a democratic affair, and a process that is ruled in equal amounts by art and gameplay design. This in order to not only get a balanced mix of gameplay variations in the game, but also a variety of visual impressions.

At the start of the design process, the artists mocked up a number of creative briefs together with level designers Inge Joran Holberg, Diego Jimenez and Niklas Astrand. These briefs explain the gameplay type and idea, story and visual theme. Everyone on the Battlefield 3 development team was encouraged to vote for their favorites among the briefs and also add ideas of their own. From there, prototypes of the favorite levels were produced in so called “pods” — pairs with a level designer and artist per map — so the team could play them to see which ones were the most promising.

Then, the team as a whole weighed the maps against one another to see which ones would make the most compelling and diverse package to ship the game with. We finally ended up with the 9 cherry-picked multiplayer maps you just read about. They’re the best of the best, the maps that shone the brightest in our playtests, and the ones that combined bring out everything we want both veteran and new Battlefield players to experience in Battlefield 3 multiplayer.

Oh, and did you know there’s a sand castle on one of our maps in Battlefield 3? This classic easter egg has been present in many Battlefield maps through the years. See if you can find it!