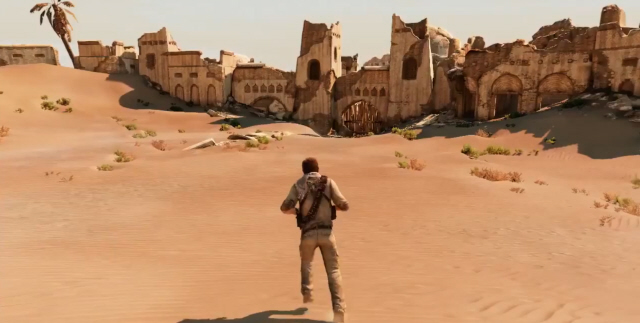 Uncharted 3: Drake’s Deception has a single-player campaign that is roughly 8 or 9 hours long, reports reveal. The quest is full of amazing set-pieces that definitely pushes your PlayStation 3 system to the limit, so it will definitely satisfy many. But others think the single-player game is much too short for a full-priced $60 game.

Of course, the game also has a fully functional multiplayer mode that is sure to keep many busy for much longer than the single-player game lasts, and will surely inject the series with long-term replay value.

The Uncharted 3 release date is fast approaching! The game will be released exclusively for PS3 on November 1st, 2011 in America, on the 2nd in Europe and Japan, and on Nov. 3rd in Australia.

Here’s a new trailer for Uncharted 3: Drake’s Deception showing of the “Desert Village” gameplay from the single-player campaign.

In other Uncharted 3 news, Sony has confirmed that if you buy Uncharted 3 you’ll snag yourself a Starhawk beta code for 2012 as an added bonus. This voucher will be included in all retails copies of Uncharted 3 and will gain those with a code early access to the Starhawk Public Beta. Starhawk is the spiritual successor to the PS3 launch title Warhawk and promises an incredible online multiplayer experience that only the PS3 could deliver; as the game is a PS3 exclusive.