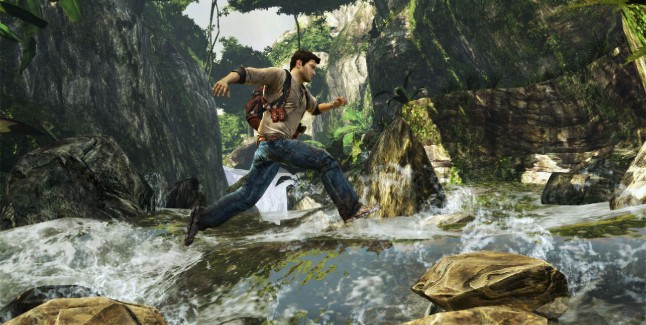 This Uncharted: Golden Abyss Preview gives a quick look at what can be expected from Naughty Dog’s upcoming action-packed title!

Uncover the dark secret behind the 400-year-old massacre of a Spanish expedition as Nathan Drake follows the murderous trail of an ancient and secret Spanish sect. Caught in the middle of a rivalry between Jason Dante – his old friend – and Marisa Chase – the granddaughter of an archeologist who has mysteriously vanished without a trace – Nate races into the treacherous river basins, undiscovered temple ruins and karst caverns of Central America in search of a legendary lost city, only to find himself pushed to the edge of the Golden Abyss…

Uncharted: Golden Abyss is currently being developed by SCE Bend Studio, with development overseen by Naughty Dog. No release date has been announced yet. We do know however that the game’s events are set before Uncharted: Drake’s Fortune!

Check out the first footage of Nathan Drake’s next adventure in Uncharted: Golden Abyss on the PSVita, straight from E3 2011 at the Sony Conference.

Core elements of the game are revealed in this exclusive interview with Creative Director John Garvin.

And take a look at the Gameplay of Uncharted: Golden Abyss in this E3 2011 Game Demo Walkthrough on the PS Vita!

Here is a list of key elements that will be available in Naughty Dog’s Uncharted: Golden Abyss based on news and announcements made so far.

Developers Sony Bend have stated they were keen to make sure the game feels familiar to Uncharted fans, but that it will make use of the PS Vita’s extra features such as the touch screen and panel, as well as the sixaxis function.

The gameplay is a mix of shooting and plat-forming elements, including in-depth puzzles which must be solved using various clues from Drake’s personal journal. A new feature is the ability to use a camera and photographs to identify certain locales. Exploration and puzzles are said to be a major focus of the game, as opposed to gunplay.

Take a look at our Uncharted: Golden Abyss Screenshots Gallery!