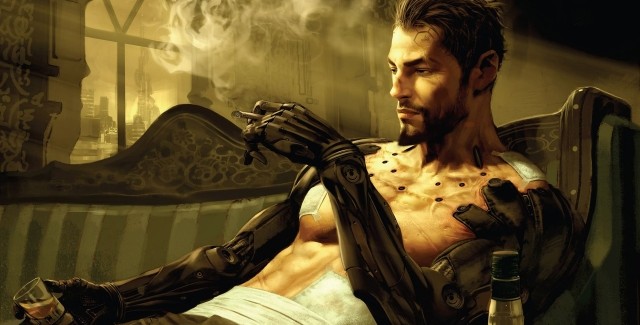 This cyberpunk-inspired game takes place during the year 2027, 25 years before Deus Ex. Nanotechnological augmentations have yet to be developed and biomechanical augmentations are the current state of the art. The main protagonist, Adam Jensen (voiced by Elias Toufexis), is a private security officer with Sarif Industries, a leading company that specializes in human augmentations.

After he witnesses an attack on his company which leaves him horrifically injured and forced to undergo augmentation to survive, “the conspiracy begins.” The player visits four cities over the course of the game, including Detroit, Shanghai, Montreal, and Singapore. In addition, the protagonist has his own apartment where he may store his secrets and collected information. The events in the game lead to the formation of UNATCO from the original game.

OK time to break down the score.

With a massive injection of cyber punk and a futuristic feel that is second to none, Deus Ex will have you feeling as if 2077 is actually home. Everything seems to fit in with a future not too far away, the devil is always in the detail and if they missed anything out I sure didn’t notice at all. The cinematics belong in a movie, and the graphics do a brilliant job of presenting the entire game.

Hacking, stealth, combat and straight up action are just a few of the aspects of Deus Ex but Human Revolution takes from its predecessor and makes an evolutionary jump into what many may consider gaming perfection. In-depth levels with no detail missed, allow you to explore endlessly discovering new methods of tackling tasks and objectives. Almost every mission including sub-missions can have a multitude of possible solutions, so whether its Solid Snake sneaking style or Rambo guts and guns approach, Deus Ex delivers for everyone.

For once in my online review career I actually have something constructive to say about a games sound: “GO BUY THE SOUNDTRACK!” Ok maybe not my best line ever, but the music that accompanies you throughout the game is mind-blowing. A gentle mix of techno future sounds that sucks you into a world that feels real and actually had me on the edge of my seat as the intensity grows as you play through.

In my opinion this year hasn’t had many very strong contenders for game of the year yet, there have been a few but none of them seem to hold a candle next to Deus Ex: Human Revolution. The game takes gamers through a world that is believable and futuristic, it makes you think about missions and actually involves you as a person that is something that seems to be missing from a lot of larger titles nowadays. Deus Ex: Human Revolution is some of the most fun you’ll have this year, simple as, no questions asked and a must-own for any serious gamer.

Thanks for taking the time to read my review if you have anything you’d like to ask or maybe just leave a few opinions of your own then the comments section awaits you 😉 I look forward to your comments.