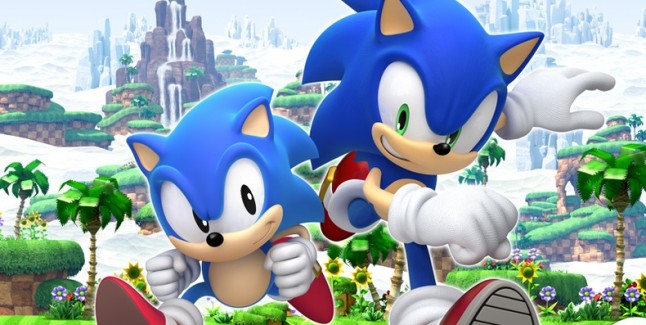 This Sonic Generations Preview gives a quick look at what can be expected from SEGA’s upcoming platform game!

Sonic Generations is an upcoming 2011 platform video game in the Sonic the Hedgehog series, currently in production by Sonic Team for PlayStation 3, Xbox 360, and Nintendo 3DS. It will be released by Sega in North America and Europe during November 1, 2011 and in Japan on December 8, 2011.

Sonic and his friends are celebrating Sonic’s birthday by having a picnic. A cake is revealed, but Sonic and co. become victim to a “time hole”, which takes him and his friends back in time. Sonic then meets a younger version of himself, “Classic Sonic”. The two Sonics then team up to save their friends and fix the time stream.

Take a look at this Sonic Generations interview with Patrick Riley!

This is a complete video at the Sonic Generations demo showcasing the Green Hill and City Escape. levels

And check out this awesome “Sonic Through The Years Trailer!”

Here is a list of key elements that will be available in SEGA’s Sonic Generations based on news and announcements made so far.

Characters
A wide variety of characters have been announced by SEGA.

Playable characters will include:

Non playable characters will include:

Classic Levels
The game features levels derived from 20 years of Sonic history, spreading across three eras: Classic, Dreamcast and Modern. Each level can be played with either Classic Sonic or Modern Sonic, each taking their own routes throughout the level.[9] Classic Sonic’s levels are strictly two-dimensional side scrolling stages, using classic moves like the Spin Attack and Spin Dash while Modern Sonic’s levels follow a gameplay style similar to more recent entries in the series, with the console versions using the 2D/3D style gameplay of Sonic Unleashed and Sonic Colors, featuring homing attacks, boosting, speed drift and the quick step.

Other than the original Green Hill Zone, both the Xbox 360/PlayStation 3 version and 3DS versions of the games feature their own list of stages, taken from various games throughout the series. The following stages have been announced by Sega:

3DS Version
The 3DS version uses the 2D gameplay of the Sonic Rush series. Unlike the console ports, the 3DS version will feature special stages (based on the ones from Sonic Heroes) and a multiplayer versus mode, and the majority of stages included will be different from those of the console versions. There will be a local wireless 2-player race mode in the 3DS version of the game and a StreetPass will be used to unlock special content and challenges as one pass by someone else.

Hub Worlds
Hub worlds like the ones in Sonic Unleashed have been confirmed in an interview with Takashi Iizuka. He said that the hub world starts out as the white space, but opens up more as the Sonics pass through more levels.

Take a look at our Sonic Generations Screenshots Gallery!