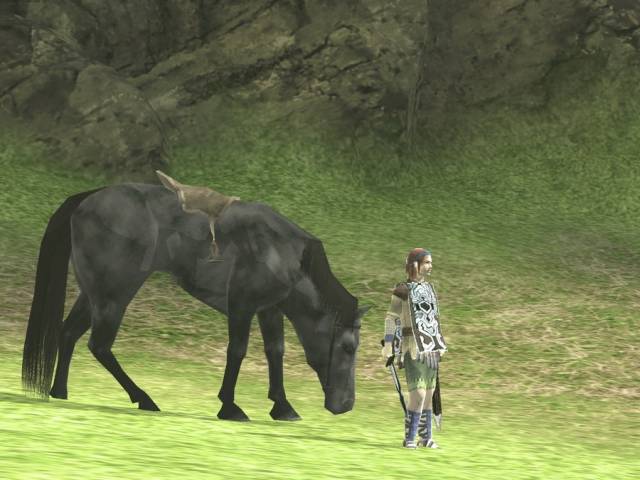 Our Shadow of the Colossus Cheats, Secrets and Easter Eggs List.

Index of Shadow of the Colossus Guides:

Shadow of the Colossus Secrets

Increase Health and Stamina with White-Tailed Lizards and Fruit

The White-Tailed Lizards crawling around in many areas of the game can be eaten to increase your Stamina. Just equip the bow and shoot the lizard, then press the circle button to pick up and eat it.

Also on many of the trees within the game carry Fruit that can be used to restore and increase your Maximum Health. Again just equip the bow and shoot at the Fruit hanging in the tree, once it drops go over and press the circle button to eat it.

Reminiscence Mode
After killing any Colossus, you can go back to their petrified bodies and by pressing circle, your character will kneel down and pray. This will activate Reminiscence Mode, where you can find the Colossus again as though it were a flashback.

ICO Symbol
If you use a memory card with an ICO save-game on it, your horse; Aggro, will have the ICO “I” logo on its forehead as opposed to the usual mark.

Shadow of the Colossus Unlockables

White Agro
You need to complete both Normal Time Attack and Hard Time Attack to receive all 16 items. Afterwards, at the main menu, hold the circle button when selecting New Game, New Game (Hard Mode) or Load Game. Finally once the game starts, Agro will now be white.

Brown Agro
To get all items in Normal or Hard Time Attack mode, just hold down the square button at title screen.

Time Attack Rewards
You must first complete the game once to unlock Time Attack mode. Then in order to begin a challenge, walk up to a statue in the temple and pray using the circle button.

Unlock Hard Mode and Time Attack mode
Once you have beat the main game, watch all of the credits till the end. Then after they have finished you have the option to save your game. Save it and you will unlock both Hard and Time Attack Mode.

Tags: Shadow of the Colossus