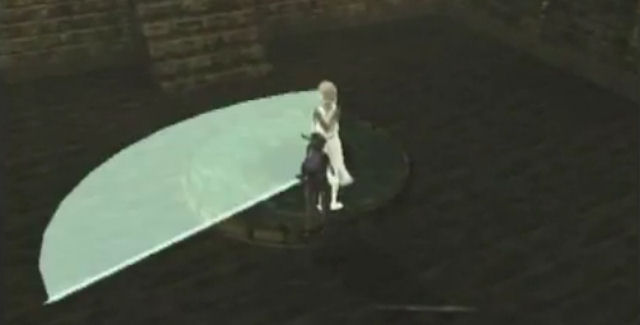 Welcome to our ICO Cheats, Secrets and Easter Eggs list.

Star-Wars Lightsaber-like Weapon
This has not been confirmed yet if it works on the US-PS3 version or not. It does not work on the US version of the PS2 game.

With 2 Player Mode enabled, play the game through the waterfall and reach an area where you get the mace by throwing a ball into a box at the first play. This time a Star-Wars-Like Weapon will fly in instead of mace.

This weapon is very powerful and will kill the shadow within 1-2 hits. And the weapon will be prolonged to triple the size of the sword if you grabbed Yorda’s hand when attacking. (Even longer than the original Star Wars lightsaber)

Alternative Ending
The game must already have been completed in order for this to work. Right at the end of the game when Ico wakes up on the beach, make your way all the way over to where the cliffs are and continue your way up the beach.

Along the way you should come across a large rock, there should also be a couple of watermelons situated near this large rock. Pick up one of these watermelons and proceed up the beach until you reach Yorda. You will now be treated with a slightly humurous end video. This does not work on the US version of the game.

Enable 2 Player Mode
This has not been confirmed yet if it works on the US-PS3 version or not. This code does not work on the US-PS2 version of the game.

You need to play and finish the game once. Then wait until the credits finish and once you get control of ICO, search for Yorda beside the sea shore. After the final ending you will be prompted with a save screen. Save it and restart the game with Yorda controllable (2nd player) and 5 different background music and screen to choose from.

English Subtitles (PAL Version)
When you have completed the game, you will get control of Yorda and have different music, but her subtitles are now in English rather than in hieroglyphics.

Super Jump
This has not been confirmed yet if it works on the US-PS3 version or not. Otherwise, this will work on the PAL version of the game.

You first need to make sure the game is set to 50hz. If it is set to 60hz then take your memory card out before you boot up the game, set to 50 and then put the memory card back in at the title screen. Now just load up your game or start a new one.

Now in order to do the superjump you need to have a stick or a sword equipped, it will also work with the Star-Wars-Like Lightsaber. Now start running in any direction and do a running jump.
Right after you need to hit Triangle and Square. If you did the timing just right, you will see him fly further and higher than he normally would.

Thanks to Str00py for the secret videos.

Do you know of any more cheats or secrets in ICO? Please share in the comments below and we’ll give you credit for your discoveries!