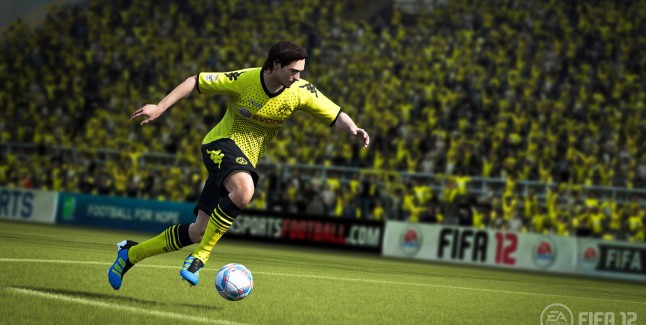 This FIFA 12 preview gives a quick look at what can be expected from EA Canada’s upcoming sports title!

FIFA 12 is the nineteenth game in Electronic Arts’ FIFA series of association football video games. It is being developed by EA Canada, and will be published by Electronic Arts worldwide under the EA Sports label. David Rutter, the line producer for FIFA 12, promised “a revolutionary year for FIFA … especially in the gameplay department.”

Take a look at this E3 2011 interview with Ea Producer David Rutter as he talk a little bit about what we can expect from FIFA 12!

The FIFA 12 : Official Player Impact Engine is detailed in this Walkthrough

The Pro Player Intelligence element is explored in this interview with FIFA Gameplay Producer, Santiago Jaramillo.

Check our this awesome featurette that catches up with FIFA players all over the world.

And take a peek at this Dortmund vs Arsenal Match gameplay footage presented at Gamescom 2011!

Here is a list of key elements that will be available in EA Canada’s FIFA 12, based on news and announcements made so far.

FIFA 12 sports several new features and improvements over its predecessors.

Overall Presentation
For the first time in several years the game’s presentation and front end has been radically redesigned with the familiar vertical menus being replaced by a side-scrolling menu bar system.

Tactical Defending System
The new Tactical Defending system aims to change the approach to defending by placing equal importance on positioning, intercepting passes and tackling. When defending there will be more of an emphasis on slowing attackers down and containing them, and/or pressuring AI players into faltering. The defensive “press” button has been removed from FIFA 12 in favour of a more manual form of defending.

Precision Dribbling
The Precision Dribbling feature allows players to dribble whilst shielding; this means that players can still move around the pitch whilst holding players off, rather than being rooted to the spot. Close control has also been added below jogging as a way of allowing players to take smaller, more frequent touches, keeping the ball closer and keeping tighter control.

Career Mode
The manager’s relationship with players and the media will play a larger role in FIFA 12. Elements such as team selection, success, and salaries all affect individual players’ attitudes and morale. The press can also pick up on injuries and unrest, all of which can impact performance on the pitch.
Unhappy players can even talk to the press and stir up interest from other clubs, with transfer AI also having been improved upon. Transfer targets will sometimes demand excessive wages if they think they can get away with it, and rival clubs will chance tempting your star players away for a bargain price.
Other improvements to Career Mode include the calendar, news story displays and news feeds, which aim to make information such as upcoming events, transfers, and rumours more accessible.

Online
EA claims to have “revolutionized” the online side of FIFA 12. Among the changes are:

Commentators
Martin Tyler returns as the main commentator, with former Arsenal and England player Alan Smith as co-commentator. Smith will be replacing long-term FIFA contributor Andy Gray following his dismissal from the Sky Sports commentary team. It has also been announced that second English commentary team will be included in the form of ITV’s Clive Tyldesley and Andy Townsend.

Impact Engine
The Impact Engine will improve collision variety, accuracy, and momentum preservation. The Impact Engine has been cited as a game changer, making FIFA 12 less structured and synthetic than its predecessors, and has been described by producer David Rutter as “the biggest technological change to the series since the transition to the current generation of consoles.”

Be sure to check out our FIFA 12 Screenshots Gallery!