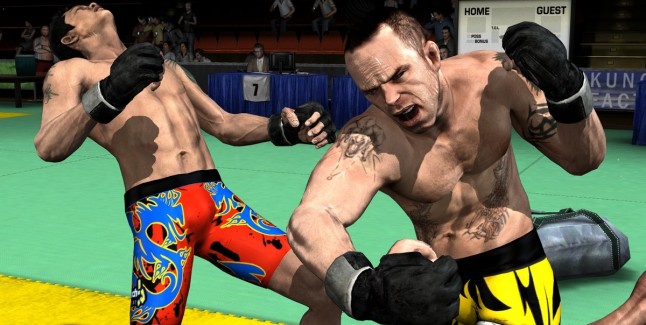 This Supremacy MMA preview gives a quick look at what can be expected from 505 Game’s upcoming fighting game!

In this title, the real fight doesn’t start in the bright lights of a championship stadium but in the back alleys, underground fight clubs, amateur arenas, and unauthorized bouts. Players get to grips with the hard-working, tough-as-nails fighters who give their bodies and souls in a bid for SUPREMACY.

Supremacy MMA breaks all the rules established in previous MMA titles and will embrace fast and furious gameplay combined with bone crushing brutality.

Play as an MMA Legend or an upcoming fighter as you scrap your way from obscurity to SUPREMACY. Engage in truly No Holds Barred combat, complete with illegal, vicious finishing moves, exotic, underground locales and an authentic array of individual fighting styles from Muay Thai to Jiu-Jitsu. Choke out opponents, break bones and abuse your enemies and see who has the skill and will to survive.

Check out this Supremacy MMA Interview with Daryl Pitts of Kung Fu Factory!

Take a look at the story trailer.

This demo showcases the gameplay of Supremacy MMA.

And watch as fighter Jens Pulver tries out the demo.

Here is a list of key elements that will be available in 505 Game’s Supremacy MMA, based on news and announcements made so far.

Vita Exclusives
The Vita version packs exclusive elements not seen in the console versions, including fighters, venues and undefined “features” exclusive to the handheld version.

Instant arcade action
Supremacy MMA features controls that are more akin to your favorite arcade fighter than a slow-paced simulation. The result is the perfect mash-up of easy fighting gameplay and MMA strategic depth.

1000 Moves
Like any good arcade fighting game, Supremacy MMA features a rich combo system with more than 100 moves, all of which offers ever-increasing levels of depth for players interested in truly mastering the art of combat.

Fighting Styles
Supremacy MMA is all about styles. With a bevy of totally unique fighting styles, each with a full set of individual moves, counters, stances and attacks, players must choose their discipline wisely, or suffer the bone-crushing consequences!

Brutal KO’s
Forget about the “Some Holds-Barred” fighting that licensed MMA games have evolved into; welcome to truly No Holds Bar fighting, complete with brutal knock outs that would make a heavyweight champ cringe. Blown knees, blasted-out arms, broken necks, if it could happen in a match, it can happen in Supremacy MMA.

Every fighter has a story
Where other MMA games dwell on re-creating a television-style broadcast simulation, Supremacy MMA offers a totally fresh take, telling the stories of up-and-coming fighters and the challenges they face in their bid for ‘supremacy’.

Be sure to check out our Supremacy MMA Screenshots!