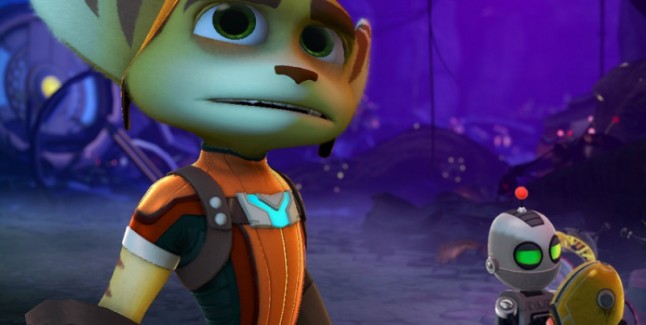 Ratchet & Clank: All 4 One will be released on October 18, 2011 in America exclusively for PlayStation 3. Europe gets the game on the 21st and Australia on the 20th

All 4 One is the next action-adventure title in the critically acclaimed series with platform fans favorite mascot characters, four heroes, joining together for the first time: Ratchet, Captain Qwark, Doctor Nefarious and Clank. Online and offline four-player co-op is the key feature.

All 4 One delivers an explosive new adventure infused with the series’ signature humor and cinematic style, while being brought to life with vibrant cinematic visuals. The latest title also supports stereoscopic 3D.

Fans who pre-order the game are given certain goodies depending on where you order. Here’s the list:

Mr. Zurkon (GameStop)
A small, hovering synthenoid, Mr. Zurkon aids your team in battle by attacking enemies with his mounted laser while insulting and taunting them with his comedy-insult logic processor.

T-Rex Morph Mod (Amazon)
Turning enemies into farmyard animals not your style? Want a more prehistoric take on the Morph-O-Ray? Use this T-Rex Morph Weapon Mod to transform your enemies from dangerous threats into a baby dinosaur.

Pyro Blaster Unlock (Best Buy)
Fry your enemies up with this Kerchu-engineered flamethrower that offers your enemies two choices: regular or extra crispy!

Sheepinator Mod (Wal-Mart)
The classic version of everyone’s favorite Ratchet & Clank weapon is back! Unlock the Sheepinator Morph Weapon Mod to transform even the fiercest aliens in the galaxy into harmless sheep.

Here is a gameplay trailer.