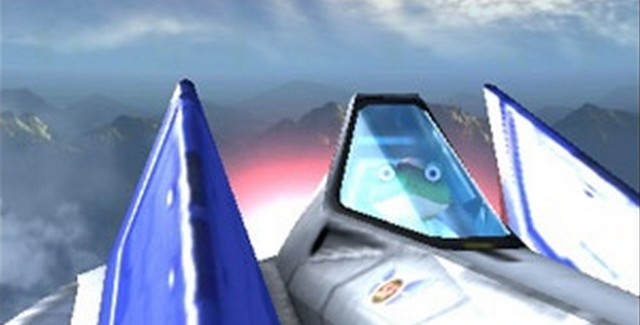 Our Star Fox 64 3D preview video gives you an advance look; a Let’s Play of 3DS’ highly anticipated re-release of the Nintendo 64 classic!

Star Fox 64 3D updates the classic Action Space Shooter for a new generation! Released way back in 1997 for the Nintendo 64, Starfox 64 is fondly remembered by many as a game that was equally as great as it’s predecessor; a game that made a huge splash on the Super NES as the first polygonal 3D game made by Nintendo, powered by the “Super FX” chip. The N64 sequel gave the world a game that was entirely in 3D.

Star Fox 64 made just as big a splash because it was the first ever game to include “rumble” or “force-feedback”; which was provided via the included Rumble Pak that snapped into the bottom of the N64 controller; allowing players to “feel” every shot. It’s quite ironic then that the 3DS version completely lacks rumble. But the game was still excellent without it anyway, and many people found it annoying enough to actually turn rumble off (like my brother….).

Remaining intact in the 3DS version is a ton of voice-overs. All of the characters in Star Fox 64 3D speak in actual English, instead of the gibberish spoken in the original Star Fox. This was huge back in the day with the original game, as it marked the first time Nintendo included extensive voice work in a title, and as a result the game was one of the largest ever released for the N64 platform at that time.

The 3DS version remakes the game by giving us high-definition visuals and stereoscopic 3D graphics; which make the game look sharp, crisp and eye-popping! Brilliantly updating the game for today’s players. Meanwhile you can play the game using motion controls, where your Arwing ship is controlled by simply moving the game system itself. You can also use the Control Stick (er, Circle Pad) on the 3DS or the D-Pad to control your vehicle. Star Fox 64 3D also features a new multiplayer mode that makes use of the 3DS camera’s to allow you to see your opponent and take photos of them as they are destroyed by you. Sadly this mode is local only; no online support.

In the following four videos, you’ll see over an hour of raw, unadulterated footage of Star Fox 64 3D being played by me on the Nintendo 3DS. This includes the intro in its entirety, the entirety of the Training Mode, which shows you how to play the game; and Fox’s adventures through Mission #1: Corneria, Mission #2: Sector-Y, Mission #3: Katina, and finally, Mission #4: Solar. Included are the boss fights at all four levels and footage of the stages in their entirety, as well as viewpoints showing the action on the Topscreen and the lower Touchscreen… in 2D of course (3D doesn’t work unless you have a 3D monitor, which most people do not).