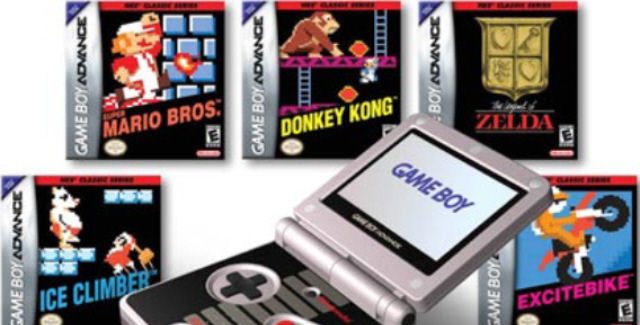 The big news today is the Nintendo 3DS Ambassadors program has begun! If you bought a 3DS before the pricedrop, you’ll get 20 free games to download to your 3DS.

Here’s how to download your 10 free NES Virtual Console games:

1. From the Nintendo 3DS HOME menu, select the Nintendo eShop icon.
2. Scroll left and select “Settings / Other.”
3. Scroll down and select “Your Downloads” to view a list of transactions. The NES game will be listed here once it is available to download.
4. Tap “Redownload,” then “Download.” The game will now be downloaded to the SD Card.

Here’s a list of all 10 free NES Virtual Console games:

1. Super Mario Bros.
Game Description: For more than twenty years, Mario and Luigi have been tirelessly running and jumping across these caves and castles to put a smile on every player’s face. Squash goombas and crawl down pipes. Swallow mushrooms and Fire Flowers. Discover or rediscover one of the most popular video game of all time.

2. The Legend of Zelda
Game Description: The brave Link begins his hazardous journey in the fantastic world of Hyrule. Using your sword, your shield and your wit, retrieve the eight fragments of the Triforce and save the princess Zelda from the evil Gannon in the game that started one of the most critically acclaimed series of all time.

3. Zelda II: The Adventure of Link
Game Description: This direct sequel to the original The Legend of Zelda is famous for taking the series in a new direction, while also introducing elements that would go on to become standard in future Zelda games. In Zelda II the Adventure of Link, Link is on a quest to seek the Triforce of Courage and awaken Princess Zelda from a sleeping spell placed upon her by an evil wizard.

5. Donkey Kong Jr.
Game Description: Donkey Kong has finally been captured by Mario! Reverse roles and help his son Junior avoid many dangers to save the giant ape. Here is another smash hit of the early Eighties in which, for the first and only time, Mario plays the role of the “bad guy”.

6. Balloon Fight
Game Description: Originally a hit in the arcades of the early ‘80s, NES classic Balloon Fight puts you in control of a heroic balloonist. Simply pop the balloons of your enemies before they pop yours! Falling enemies will deploy a parachute, so hit them again to knock them into the water below or into the jaws of a hungry fish. But watch out, the fish has its eyes on you, too!

7. Ice Climber
Game Description: Conquer treacherous mountain peaks, leap across icy chasms and swat snow-dwelling beasts – solo or with a friend – in this NES classic from 1984. Use your hammer to bash blocks from below and to defend yourself from the wildlife as you jump from floor to floor towards the summit.

8. Yoshi AKA Mario & Yoshi
Game Description: Mario & Yoshi is a fast-paced NES puzzle game in which you must mix and match falling characters and piece together eggshells to free the Yoshi trapped inside. Simply move Mario back and forth to catch the falling Goombas, Boos, Bloopers and Piranha Plants.

9. Wrecking Crew
Game Description: In NES classic Wrecking Crew, Mario swaps his plumber’s cap for a hard hat as he takes on the unique role of a demolition engineer! Your aim is to demolish every obstacle in each enemy-infested level, while working out the most destructive route through the networks of ladders and scaffolds.

10. Metroid
Game Description: Metroids – the most dangerous creatures in the galaxy – have fallen into the hands of Space Pirates! As bounty hunter Samus Aran, battle through the depths of planet Zebes to take out the pirates’ leader Mother Brain and restore peace to the galaxy.

• Ambassador Certificate
Description: As soon as details for the 10 Game Boy Advance Virtual Console titles are available, Nintendo will send an update to those who have downloaded the Ambassador Certificate. 3DS Ambassadors will be able to download 10 Game Boy Advance Virtual Console titles for free before the end of the year. — Five of the ten GBA Virtual Console games have been announced so far. They are as follows: Yoshi’s Island: Super Mario Advance 3, Mario Kart: Super Circuit, Metroid Fusion, WarioWare Inc.: Mega Microgame$, and Mario vs. Donkey Kong.

• Pac-Man (Namco Bandai, Game Boy, $3.99)
Description: PAC-MAN has arrived on the Nintendo 3DS system. Navigate through mazes and eat Power Dots while simultaneously avoiding the Ghosts. See how many mazes you can clear before losing all your lives.

• House M.D. – Episode 2: Blue Meanie (Legacy Interactive, 800 DSi Points / $7.99)
Description: When an abrasive chef’s body turns blue, you must join Dr. Gregory House and his team to track down the correct diagnosis by interviewing and examining the patient, running lab tests and even performing surgery. (For Nintendo 3DS / Nintendo DSi)

• GO Series Fishing Resort (Gamebridge, 200 DSi Points / $1.99)
Description: Feel the swing of the fishing rod as you cast, the tension in the line as you reel in the fish and its weight as you catch it with the net. Use the Stylus to feel every bite, tug and pull. Buy new rods, lines, floats and bait, take part in challenges and trade Member’s Cards and Rankings with friends via Wireless Communications. Developed in Japan with anime graphics and style, Fishing Resort oozes charm and is a delight to play. (For Nintendo 3DS / Nintendo DSi)

• Trenches Generals (Fishing Cactus, 700 Wii Points)
Description: Command Royal British Expeditionary Forces as the defender of the free world. Your troops must take to the field to defend your bunker and use trenches located on the battlefield to hold their ground. Features:
• Engaging One-Player campaign!
• Exciting army customization. You war. Your way!
• Two-Players splitscreen versus and coop game modes.
• Various skirmishes game mode! (Zombies inside)

• 1950s Lawn Mower Kids (Zordix AB, 500 DSi Points / £4.50 / €5)
Description: Your mission is to mow lawns while avoiding dogs, ducks, cats and people like grumpy old Joe in a beautiful suburban 1950s American setting. Control time and speed with Mr. Mowman’s mysterious contraptions and lead the kids Tom, Nancy and Tim out of danger. Avoid mowing down intricate flowerbeds, crashing into well-laid tables and angry animals. The key to success is keeping all three kids moving and to use the abilities of each kid to your advantage. Remember, ill-tempered old Joe will keep an eye out for sloppy children that mow down his flowers! (For Nintendo 3DS / Nintendo DSi)