This is a Dragon Age: Origins review; it’s a game full of witty banter, epic adventure and romance it has everything a good story needs, combine this with action-packed, well crafted gameplay and you’ve got one heck of a video game!

Check out the Video Review! 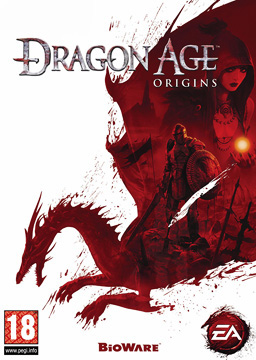 You are a Grey Warden, one of the last of a legendary order of guardians. With the return of an ancient foe and the kingdom engulfed in civil war, you have been chosen by fate to unite the shattered lands and slay the archdemon once and for all.

The story of Dragon Age: Origins is pretty epic.
It is full of hope and danger if not a little unoriginal in basic plot. The creators of Origins really took time and effort to develop the different cultures, races and locations in such a way that it was a joy to discover and learn about them all.

I think what really made the game and its story however, were the characters in your party.
The witty banter between different team members was intriguing, touching and occasionally just plain hysterical! Earning their trust and friendship really made you feel as though you were getting to know them all.

The story has the IT-factor that makes you want to play it over and over, like a good book you can’t put down or a movie you’ve watched so many times that you can memorize every word.

The gameplay was great too; for the most part I think it offers a lot for the player to do!

I liked the ability to assign abilities and skills. Leveling up wasn’t bothersome or complicated and the high-octane combat was enjoyable too.

I also liked that the game relied quite heavily on dialogue that wasn’t too long-winded or involved (like Red Dead Redemption for example).
The game is lengthy which makes a nice change from the cheap thrills we often see nowadays. Sprawling levels often lasted a few hours – maybe more if you search every room and cavern, you could also find some great weapons and gifts to sweeten up your team members.
I also love the DLC’s so far too; they add to the core game and really freshen the experience up a little if you are playing it through for the second time!

The Graphics and Visuals

The Graphics are okay – nothing to write home about.

Textures look good, the character models are fine and the animation is okay if not a little bit ‘buggy’.
I think I was more impressed with the art direction than anything else.
I felt the levels and location were really unique and interesting. You had no doubt that these locations were filled with a long history. My favourite area had to be Orzammar, I thought the colors were so rich, the place just leapt out of the screen! Redcliffe Village is great too purely because it just makes me think of ye olde England!

The Sound of Origins

I like the soundtrack to Dragon Age Origins but it’s not one of my favourites as an album.

Certain tracks stand out: The Party Camp, Ruins of Ostagar, The Main Theme and Dalish Elf Encampment are great examples. As an album though I felt it was pretty disappointing. The tracks are all under a minute or so long (with the odd exception) and though they work well in-game, I feel as though the music loses something on its own.

The characters really stole the show for me but the gameplay has a lot going for it and the visual design is superb. As I said before though, the game just has the “it” factor that so many titles aim for but rarely grasp.

Not familiar with the game? Check out the epic Ultimate Edition trailer!

All of the music in this video is from the original Dragon Age: Origins score purchased from iTunes.co.uk! Here are the tracks in the order that they appear:

Liked this game? Who was your favorite character? Don’t forget to leave your own comments and opinions in the comment section below!