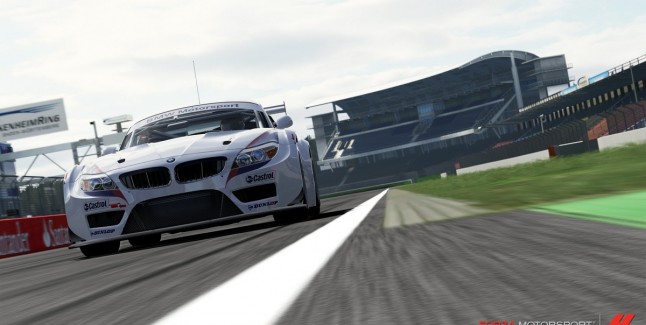 This Fortza Motorsport 4 preview gives a quick look at what can be expected from the upcoming racing game!

Forza Motorsport 4 is a racing video game currently in development by Turn 10 Studios for the Xbox 360. It will be the fourth installment in the Forza Motorsport series, and is scheduled for release on October 11th (US), October 14th (EU) and the rest of the world on October 20th.

The game will be the first in the series to support the Kinect sensor alongside the traditional controller-based gameplay. And players will be able to import their Forza Motorsport 3 profiles into Forza Motorsport 4, giving them the ability to transfer a certain amount of in-game credits and gifted cars into their new garage!

Check out this all-encompassing interview with Bill Giese about the Kinect, cars and more!

In this developer diary, the team at Turn 10 Studio’s talk about creating the Bernese Alps level.

The Hockenheim Track is discussed in the dev. diary.

Watch this interview with Dan Greenawalt at E3 2011, in which he talks about the game and series.

And take a peek at the gameplay demo showcased at Gamescom 2011!

Here is a list of key elements that will be available in Turn 10 Studio’s Fortza Motorsport 4 based on news and announcements made so far.

Head Tracking Feature
A video demo of the game showed that the player was able to look into a corner using the new head tracking feature, allowing them to see where the apex is, and the cars around them.

Autovista
Another new feature called Autovista allowed the player to walk around and explore inside their vehicle using Kinect. The player could point at certain features, such as headlights, wheels and the engine, for further information about them. The Autovista feature is not limited to Kinect users only, and is useable by a regular Xbox 360 controller.

Image-Based Lighting
The graphics used to create these cars are formed using image-based lighting which allowed the developers to create perfect reflections, and would better immerse the car in the environment both when racing on a track or in the garage or Top Gear gear studio when viewing a car.

Career Mode
Like Forza 3, there will be a career mode for players to complete, which sees players racing at multiple locations around the world. This is known as World Tour Mode in Forza 4, previously known as Season Play in Forza 3.

Selecting Difficulty
One new feature that appears in Forza 4 is the game’s ability to adapt the difficulty as the player progresses through the career, and collect a trend of data to see how well they perform. This will allow AI drivers to change and upgrade their cars automatically to suit the player’s driving abilities. There are several types of races besides standard racing like in Forza 3. Forza 4 will include the original bumper to bumper races, but will also have Drift, Autocross, and multiple-heat races. Unlike in Forza 3 where players had no choice over which car they won at the end of each race, in Forza 4 players will be able to choose from three cars as a prize.

Check out the Trailer!

Be sure to check out our Fortza Motorsport 4 Screenshots!