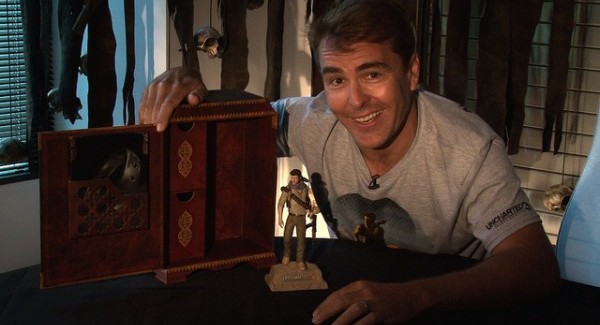 An official unboxing video for the Collector’s Edition of Uncharted 3: Drake’s Deception has been released!

Uncharted 3: Drake’s Deception is the third game in the Uncharted series.
Created by Naughty Dog for the PlayStation 3, it is due for release in North America on November 1st, Japan and Europe on November 2nd, and Australia on November 3rd 2011.

The Collector’s Edition has a wealth of goodies to enjoy and it looks like Nolan North himself will be walking us through the edition in this brilliant unboxing video!

Take a look! Prepare to be entertained and informed…

As you can see, inside the traveling chest are full size, wearable replicas of Nathan Drake’s belt buckle and his necklace with Sir Francis Drake’s ring.

The UNCHARTED 3 Blu-ray disk will come in a collectible Steelbook with exclusive artwork for the Collector’s Edition – the outside has a great render of Sir Francis Drake’s ring, with the inscription debossed into the case.

The interior of the Steelbook has been printed with the artwork of Drake under fire in the desert as a panoramic view across both covers. This is Sony Computer Entertainment America’s first ever Steelbook edition!

And the jewel in the collector’s edition’s crown is a high-quality statue of Nathan Drake. Just like the exclusive wearable replicas, and the Steelbook, you won’t be able to get this Sideshow Collectibles statue at retail, it’s only available with the UNCHARTED 3: Drake’s Deception Collector’s Edition!

As Nolan mentions, this edition is being made in limited quantity!