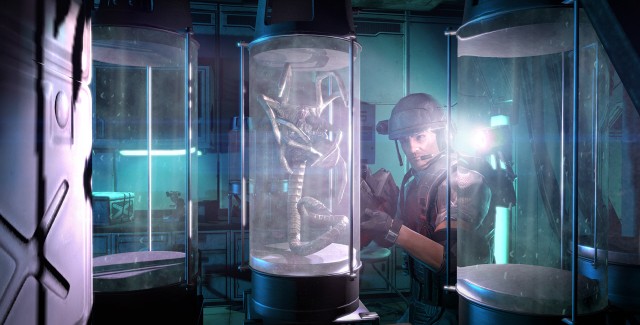 An intense new trailer for Aliens: Colonial Marines give fans exactly what they’d want from an Aliens first-person shooter; intense, haunting environments, dark gameplay where the fire from your guns is your only light, and swarms of freakish aliens to battle against.

Thankfully it looks like developers Gearbox and Timegate have nailed an Alien videogame with the look and feel of the films, based on this new trailer which sheds light on some gameplay footage from the upcoming title; which is scheduled for release in 2012 on Xbox 360, PS3, PC and Wii U, alongside the 3DS/DS game Aliens: Infestation.

Aliens: Colonial Marines will bring new levels of bone-chilling suspense and adrenaline-filled action to the renowned franchise. The game pits players against the universe’s ultimate alien killing machines, the Xenomorphs, in claustrophobic environments guaranteed to produce blood curdling thrills that the movie is renowned for.

Aliens: Colonial Marines begins with an ostensibly abandoned ship, the U.S.S. Sulaco, recovered in orbit around LV-426. Players lead a group of highly trained United States Colonial Marines as they board the deserted craft to uncover the fate of the crew. They will have to fight to survive unspeakable horrors and their own anxieties as they chase down the truth behind a galaxy-spanning deception that places humanity at the mercy of the most murderous and deadly species in the universe. Aliens: Colonial Marines features authentic environments, such as the surface of LV-426 and Hadley’s Hope, weapons inspired by the film series and is designed to provide an exhilarating and engaging new chapter in the Aliens universe.

Here is the new trailer for Aliens: Colonial Marines!