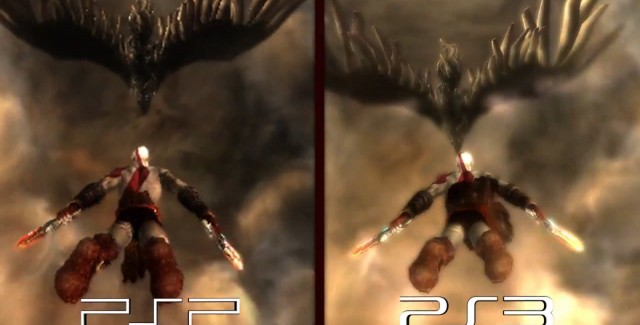 This second volume of the God of War Collection (the first set gave us God of War I & God of War II remastered for PS3, they were originally PS2 titles) takes the original PSP games and greatly improves them with high-definition graphics.

The remastering includes up-rezing the PSP engine from the PSP’s 480 x 272 resolution and 30 frames per second to 1920 x 1080p at a steady 60 fps on the PS3. Which was a daunting task for the developers, who had to painstakingly re-code the PSP engine for PS3. In addition, all of the art assets had to be up-rezed and re-painted, tripling the polygon count and giving every texture a 4x resolution for all characters and environments!

Not only that, but God of War Origins Collection was then converted to support stereoscopic 3D! They also had to re-render every cinematic scene, effectively having to remake it since up-rezing didn’t give them the quality they wanted for the cinematics. And between the two PSP titles (God of War: Chains of Olympus and God of War: Ghost of Sparda) there is over an hour of computer-generated movie scenes!

You can see the final result for yourself in this God of War HD (PS3) vs God of War SD (PSP) Comparison video! Don’t forget to increase the resolution of the video to 720p and watch in fullscreen!