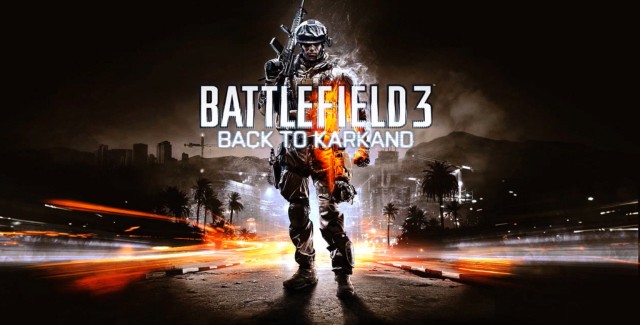 Battlefield 3 DLC runs the gamut, so here is downloadable content clarification for the highly anticipated upcoming first-person shooter that publisher Electronic Arts is labeling as it’s “Call of Duty”-killer.

There are a number of Battlefield 3 pre-order options available, so here is the breakdown:

Back to Karkand
How To Get It: Pre-Order the Limited Edition of Battlefield 3 for any platform (including digitally on Origin).

By pre-ordering the Battlefield 3: Limited Edition you will snag yourself the “Back to Karkand” Expansion for free! This expansion pack will be released after the launch of the game (meaning it won’t be available on day one, but at a later date). Unlike a normal DLC pack, Back to Karkand is a full-on EXPANSION, developed by the same team responsible for the Battlefield: Bad Company 2 Vietnam Expansion; and if you played the Vietnam expansion, the developers promise you can expect the same kind of scope and ambition here. “Back to Karkand” is a multiplayer expansion that pays homage to the popular “Strike at Karkand” map from Battlefield 2. Thus Back to Karkand will include four ambitious remakes of classic Battlefield 2 multiplayer maps, along with several classic weapons and vehicles from that game being included here. These Maps include: Strike at Karkand, Gulf of Oman, Wake Island and Sharqi Peninsula. If you don’t pre-order, then you can purchase this Expansion the day it is released. However expect to pay a premium, probably $15 bucks if I had to guess.

Here is a video comparing Back to Karkand with the Battlefield 2 maps.

Physical Warfare Pack
How To Get It: Pre-Order the game. Available at select retailers or via EA’s Origin online-store.

The Physical Warfare Pack is the main pre-order bonus available for Battlefield 3, and you can snag it by simply pre-ordering any version of the game at select retailers. If you do so it’ll be available from day one. The Physical Warfare Pack includes time-exclusive in-game goodies, including Weapons and Items, such as the Light Machine Gun, a Sniper Rifle Accessory and Armor-Piercing Ammunition. This will give you an edge in the multiplayer game! You’ll also get launch-day access to the DAO-12 Semi-Automatic Shotgun that players who didn’t pre-order will have to earn through normal gameplay. The contents of the Physical Warfare Pack will become unlocked for all players at no charge, at a later date down the line.

SPECACT Kit Upgrade
How To Get It: Pre-Order from select retailers. If you do so it’ll be available from day one.
What Is It: A set of 8 multiplayer skins, one for each class and side in Battlefield 3.

Dog Tag Pack
How To Get It: Pre-Order from select retailers. If you do so it’ll be available from day one.
What Is It: A set of 5 unique in-game Battlefield 3 Dog Tags to choose from exclusive to this pack.

Avatar Gear
How To Get It: Pre-Order from select retailers. If you do so it’ll be available from day one.
What Is It: Exclusive Gear for your Xbox Live Avatar or PlayStation Home character based on Battlefield 3.

Will you be pre-ordering Battlefield 3?!