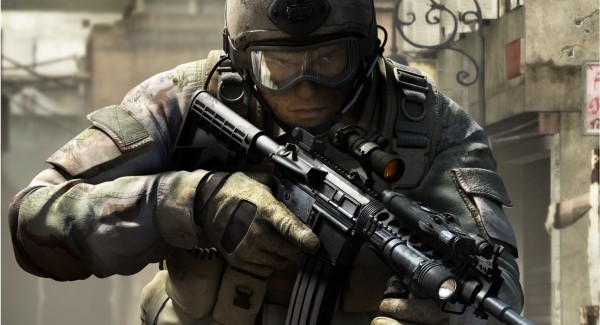 This Battlefield 3 preview gives a quick look at what can be expected from EA Digital Illusions CE’s upcoming first person shooter.

Battlefield 3 is scheduled to be released on Microsoft Windows, PS3 and Xbox 360 on October 25th (US), October 28th (EU) and October 27th (AUS) 2011! It will be the eleventh installment in the franchise and a direct sequel to Battlefield 2.

Set in 2014, SSgt Blackburn leads a five-man squad on a mission to locate, find and safely return a US squad that were investigating a possible chemical weapons site. Their last known position was a market controlled by a hostile militia. After engaging in several gun battles, Blackburn and his squad are caught in a massive earthquake. Meanwhile, Corporal Jonathan “Jono” Miller takes part in a tank assault upon an enemy rocket battery, before preparing to advance on what appears to be a burning city!

This newest installment in the Battlefield franchise has drool-worthy graphics and looks to be a high-octane title!

Check out the gameplay commentary with Executive Producer Patrick Bach!

In this interview, Patrick Bach talks about why Battlefield 3 is different from other franchises, on creating fictional Middle Eastern conflicts, and the special Battlefield formula.

Take a peek at the multiplayer reveal trailer from E3 2011.

In this video, Audio Director Stephan Standberg talks about the sound design of Battlefield 3.

And in this developer interview, Patrick Soderlund tells us about what we can expect from the title and talks a little bit about the development process!

Here is a list of key elements that will be available in EA Digital Illusions CE’s Battlefield 3 based on news and announcements made so far.

Reintroducing Past Elements
Battlefield 3 will reintroduce several elements absent from the Bad Company titles. These include fighter jets, the prone position and 64-player battles (on PC).

Destruction 3.0
Thanks to the Frostbite 2 engine, Destruction 3.0 has been introduced. It allows for a much larger range of objects and buildings to destroy alongside more realistic-looking destruction. For example, in the earthquake prone city of Sulaymaniyah, players will experience tremors and earthquakes that will display the full capabilities of Destruction 3.0.

Single-Player
The single-player campaign is set near the Iraq-Iran border, where the US Marine Corps are fighting the People’s Liberation and Resistance (PLR). Players will be able to use vehicles during the campaign, but use will be limited.

Battlefield 3 will introduce the Battlelog; a free cross-platform social service with built-in text, game statistics and voice communicator. Users will also have the ability to join the game that friend is already playing, though both players need to be on the same platform (PS3, PC and/or Xbox 360). Using the new Battlelog players can try to beat friends’ scores and track their performance.

Check out the official trailer!