UK residents will be able to pre-order a Limited Edition copy of Battlefield 3: Physical Warfare Pack exclusively at GAME and Gamestation while US residents can order the Limited Edition from Amazon.com with a bonus ‘Dog Tag Pack’ included.

The Physical Warfare Pack available in the UK contains a variety of new weapons including the Type 88 light machine gun with bipod for superior firepower and total zone control, the SKS sniper rifle flash suppressor that provides increased stealth abilities for Recon soldiers, and the lethal armor for the DAO-12 semi-automatic shotgun!

In addition to this, the Physical Warfare Pack includes the “Battlefield 3 Back To Karkand” digital expansion pack. The expansion includes four legendary maps from Battlefield 2, boldly re-imagined in the Frostbite 2 engine.

US residents can pre-order the Limited Edition from Amazon.com and receive the Amazon exclusive DLC Dog Tag Pack for multiplayer use as well as the Battlefield 3: Back to Karkand expansion pack (as mentioned above) for free!

The DLC pack will include “5 exclusive dog tag designs to customize your soldier with” – the tags themselves will also be customizable. The code to access the exclusive content will be emailed to you the day your order ships! 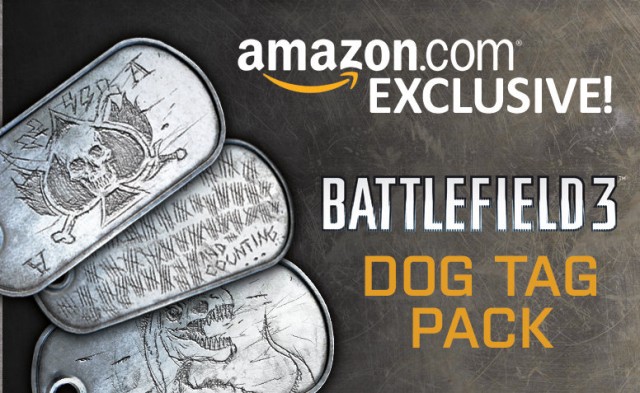